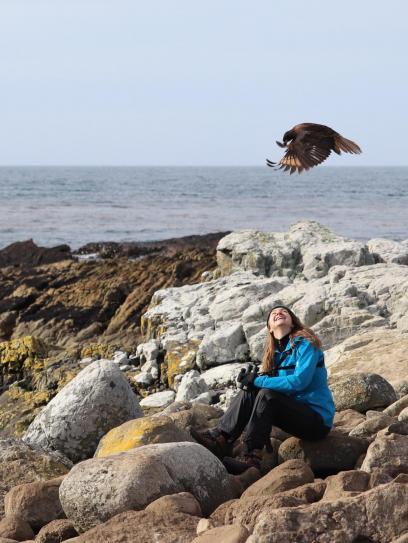 Born in Chatsworth, Ontario, Sarah’s love for nature and the ocean began at a young age. Growing up and always dreaming about the sea, she moved to Halifax in 2013 to study Marine Biology at Dalhousie University and make her dream of studying ocean animals a reality.

Sarah was also an avid painter since she was young. She pursued acrylic-based art courses throughout high school and was later introduced to oil painting from weekend classes. While in Halifax, Sarah researched long-finned pilot whales and cultivated her skills as a wildlife photographer out on the ocean. She graduated with a degree in marine biology and a certificate in animal behaviour in 2017.

IIn 2017, Sarah moved to Vancouver, Canada, and began researching gentoo penguins with the University of British Columbia. This work granted her the opportunity to camp beside the penguin colony in the Falkland Islands and experienced the full range of animals that call the windy islands home. She spent two weeks in April observing moulting penguins and animals preparing for migration while attaching monitoring devices to gentoo penguins that would track foraging behaviour for six months. Sarah then returned to the Falklands in September and October the same year. She spent six weeks collecting devices while witnessing the penguins amongst many other species prepare for spring and the mating season. In 2020, Sarah graduated with her Master’s of Science in Zoology.

Through spending many hours observing the subjects of her art, Sarah strives to capture the raw beauty of wildlife and the personalities of the animals that live there. She became a member of Artists for Conservation in 2019 and, since completing her graduate research, has been producing artwork full time.

Since 2019 Sarah has been working on an exhibit highlighting the wildlife of the remote Falkland Islands. Using her photographs from her graduate research expedition, she captures the unique behaviours of animals and the sentimental moments in their lives. With any art sale, Sarah will donate a minimum of 15% of the proceeds to Falkland Conservation to help conserve the biodiversity and natural environment of the Falkland Islands.

Since 2020, Sarah has collaborated with Australian photographers Robyn and Wade Hughes. After meeting in 2016 while researching pilot whales, a shared vision for displaying the behaviour and personalities of animals submerged in their habitat was born. Years later, this collective passion has evolved into a breathtaking collection of secret underwater scenes. With any art sale, Sarah will donate a minimum of 15% of the proceeds to the Western Australian Ocean Foundation towards creating a healthy and resilient ocean supporting all life.

As her career as a wildlife artist grows, Sarah hopes to expand her support and partner with other organizations and researchers to highlight animals and locations from around the world.