"My commitment to conservation started in first grade with a crayon drawing, in a contest for wildfire awareness. I can still see the drawing in my head:  Smokey the Bear, in his quintessential hat and blue overalls, (what he wore in the 70’s), standing with a shovel in hand next to a blackened, burned-out tree with flames at the base, a puff of smoke reached to the sky, and the cream color of construction paper. I won first place and received a bobblehead Smokey, a blue ribbon and some papers of accomplishment. All gone now,  except my memory, the message, and my blue ribbon standard, to protect all that is wild from human degradation.   "

I began donating close to home, to the Pocono Wildlife Rehabilitation and Education Center.

In 2004, I acquired the Wesley Church, a 1900’s brick building whose rafters house one of the largest brown bat maternity colonies in Northeastern PA. The protection of this particular bat species is significant, as they only have one or two pups a year. The church’s peaked roof and rafters, and hot summer temperatures, act as an incubator for hundreds of developing pups. The colony at Wesley Church can consume more than three quarters of a million mosquitoes each night. Students from both Pennsylvania State University and East Stroudsburg University research and collect data on site.

In 2012, I joined  Artists For Conservation as a Signature Member. Their vision is “to lead a global artistic movement that inspires individuals and organizations to preserve and sustain our natural heritage by uniting the talent and passion of the world’s most gifted nature artists.”  Currently, two of my paintings are traveling in the Silent Skies Mural project.  "Silent Skies" is an international collaborative super-mural mosaic, featuring all 678 endangered birds species in the world; 160 AFC artists from 15 countries participated in the project. The 100-ft installation will form the artistic centerpiece of the 27th International Ornithological Congress in August 2018 in Vancouver, BC.  After the Congress, the mural will tour internationally.

For the last six years, it has been an honor to be an invited to participant in the Southeastern Wildlife Exposition,  the largest event of its kind in the nation. SEWE promotes wildlife and nature conservation and preservation. Over 40,000 attendees come to see artists, exhibitors and wildlife experts from around the world ( Sewe Video. )

In 2015, I purchased a twenty acre plot of wetlands to preserve, from development, the skunk cabbage, an essential early spring diet for a mother black bear who returns yearly with her cubs in April to feed.

Recently, I was a participating artist in the Sketch for Survival 2018 exhibition and auction, sponsored by Explorers Against Extinction (  http://www.explorersagainstextinction.co.uk/sketch-

for-survival-2018 . ) The Sketch for Survival touring exhibition and auction consisted of 26-minute sketches and other signed artworks, all of endangered species. Profits from the auction are donated to African parks, to help establish a program for safeguarding elephant and other iconic species against poaching.

I will continue to use my work as a billboard for awareness-a vehicle for the awakening of the human soul to the necessity of protecting and preserving that which does not speak a human language. 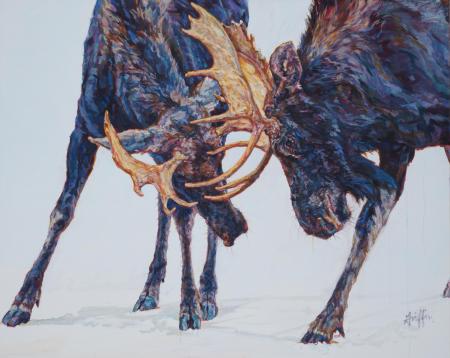