Seemingly oblivious to my presence, a rather large sea lion lifted her head momentarily to eye me before returning to her midday slumbers.  She scratched occasionally while her pup trundled curiously behind a colourful marine iguana whose swishing tail proved too tempting to resist.  The large female was soon disturbed by mockingbirds that seemed most interested in picking flies from her nose.  As I sketched her, a pair of mockingbirds decided I too was worthy of investigation.  They circled me for several minutes… as though insisting to be included in my sketch.

In the fall of 2009 I was blessed to be named the recipient of the 10th fellowship of the Artists for Conservation Flag Expedition Program.  This unique program makes possible the artistic field study of unique, threatened habitats and rare or endangered species in remote regions of the world.  The Artists for Conservation Foundation made possible my expedition, “Galapagos, Forty Days and Forty Nights - An Artist’s Sojourn”.

The Galapagos Islands are isolated from other land masses, straddling the equator with Ecuador, the nearest land, 960 km to the east.  They consist of 13 large islands, 6 smaller islands and many islets in the most active oceanic volcanic region in the world.  The islands are home to high numbers of endemic species - critically endangered waved albatrosses, marine iguanas, tropical penguins, flightless cormorants and other fascinating creatures.  Munching contentedly on foliage, 500 pound giant tortoises sometimes lumbered towards me to sniff my bare legs;  marine iguanas walked over my toes;  and comical birds, aptly named blue-footed boobies, crudely scratched their nests in the trails making it necessary to maneuver around them.  The many Darwin’s finches, along with mockingbirds, Galapagos flycatchers and tiny yellow warblers were delightfully curious, at times hopping  on my backpack , tripod and even my shoes!

The subject of my expedition encompassed endemic and resident birds and reptiles.  A disturbingly high number of the flora and fauna are IUCN red listed as endangered or vulnerable.  My goal was to observe, learn about and document through field sketches as many of these species as possible while labeling each with their current red list status and year of assessment.  During my forty days I visited 11 of the 13 larger islands starting with San Cristobal.  I was privileged to work as a volunteer at a local biological reserve which gave me unique opportunities to get off the beaten path and to access restricted areas high in the Miconia Zone where I had ample opportunity to observe and sketch endangered San Cristobal Mockingbirds.  The majority of species encountered are not timid so were relatively easy to study as they went about their daily business ignoring my presence.

This experience in the highlands also served as an initiation of sorts into some rather challenging weather  conditions and terrain.  Primarily a studio artist who despite all my pre-expedition research naively arrived in the tropical Miconia rainforest assuming that the garua season (“dry” season) really meant dry.  Not!  Hence most of my sketching and photographing was accomplished from underneath a dripping rain poncho while ankle deep in mud!   Once departing the reserve the remainder of my expedition was at lower, dryer zones.  I spent most of my time hiking across barren black lava fields, trudging through sand and scrambling over slippery algae. For my total of two weeks at sea I was fortunate to have calm weather.  Protecting my camera equipment and sketching materials from saltspray and sand was at times challenging.  Still, the benefits far outweighed the few trivial inconveniences and I fared very well overall.  Thankfully, I did not once get seasick!  Of course when hiking through rocky nurseries dotted with chubby waved albatross chicks;  tiptoeing through myriad marine iguanas topped with scuttling vermilion sallylightfoot crabs or sitting in the sand with snoozing sea lions nursing adorable pups one can hardly help but be oblivious to discomfort of any sort.

One of the AFC objectives an expedition artist is privileged to partake in is to keep a combination sketch/diary expedition flag journal.  By the time this article is reproduced in the pages of Wildscape ...my journal will have been reproduced as a limited edition hardcover book as well as being published on the Artists for Conservation website.  Initially I was so intimidated by the thought of others seeing my journal that it pretty much crippled my ability to loosen up and just sketch.  I think this is reflected in the first few stiff sketches.  I  had to get to a point where I just didn’t care and simply DO it as if I was doing it for myself and no one else.  I believe that the experience of filling a journal with 200 pages of sketches and personal insights has enriched the resulting finished studio paintings in a way that gives them increased depth and meaning.

In my quest to artistically capture the essence of Galapagos and the spirit of it’s creatures, I was struck by the fact that only 5% of residents ever get to experience what I did.  Although the population on one of the islands now exceeds 20,000, many residents know only the villages in which they live.  Sadly, they have not experienced the pristine national park areas.  The inhabited islands are undergoing severe ecological change and the primary terrestrial threats are introduced species, especially goats, cats, pigs, invasive plants and habitat destruction.  The creatures here, because of the islands historic isolation, thrived with little predation resulting in the unique lack of fear I had the pleasure of observing.  It is this isolation that makes them so vulnerable to new arrivals because their future depends entirely on their continued existence on the islands.

In addition to the consequences humans have inflicted on the biodiversity of Galapagos, this enchanted garden of Creation also finds itself corrupted by many of the outside worlds social “serpents”.   Aids, drugs, unemployment, alcoholism, teen pregnancies and child pornography are disturbingly prevalent.  Creation includes humans - our families and communities.  At the heart of sustainability is the goal of meeting the needs of the present without compromising the ability of future generations to meet their own needs.  The impact of environmental degradation falls most heavily on those who are least able to mitigate these impacts - poor, vulnerable populations.  Residents, lacking most government services and suffering high unemployment levels, are almost completely excluded from working in and benefiting from the tourist industry.  Surging tourism has changed the social structure of the islands and has risen from 17,000 tourists in 1980 to almost 170,000 in 2009.  Residents need water, food and building materials.  Although these are problems common throughout the world, they are magnified by the fragile ecosystem of Galapagos.  Changes intended to make man more comfortable often have the opposite effect on the natural world.  The challenge is how and where to make necessary changes to meet the needs of the population while enhancing sustainability.   No species exists on it’s own - we all exist as members of intimately related communities.  The Galapagos is one such community, sharing a distinct environment in a socially symbiotic relationship with mankind.

There is an Arab proverb that suggests, “To understand a people, you must live among them for forty days.”   For me, forty days represent a time frame in which minds and hearts can be changed.  Having gathered abundant reference material, I returned home to begin my studio journey.  The resulting paintings are my interpretation of the beauty and wonder of Galapagos through which I hope to inspire personal preservation and conservation attitudes.  I am motivated by the impact art can have on the emotions of individuals when they become lost in a painting as I do so many times when meeting and studying animals in their natural environment.  As I recall those first moments in Galapagos, watching silently as the mother sea lion napped while her curious pup ‘stalked’ the iguana and the mockingbirds ‘stalked’ me, I cannot help being moved by that single, beautiful example of Creation.  We are but tenants here, called as custodians on behalf of future generations and all species, to tend the garden of Creation.

The good news is that 97 % of Galapagos land mass is uninhabited protected National Park area.  Galapagos is still an ecological wonder that has the potential to set an example for sustainable growth.  If governments, conservation groups, developers and individuals can work together in an effort to achieve a balance between the needs of humans and the natural world in Galapagos, it can be done elsewhere.

I have had the privilege of meeting firsthand the creatures who become the subjects of my artwork.  My desire is to share this experience with others who may never be able to encounter firsthand a wild creature in their natural environment.  As stewards of Creation, we must remember our place in the natural world.  My art is a celebration of the privileged place I hold in partnership with my fellow creatures and my Creator.  A genuine appreciation of our place in the natural order is where true change begins — a truth driven home by my “forty days and forty nights” on the extraordinary islands of Galapagos. 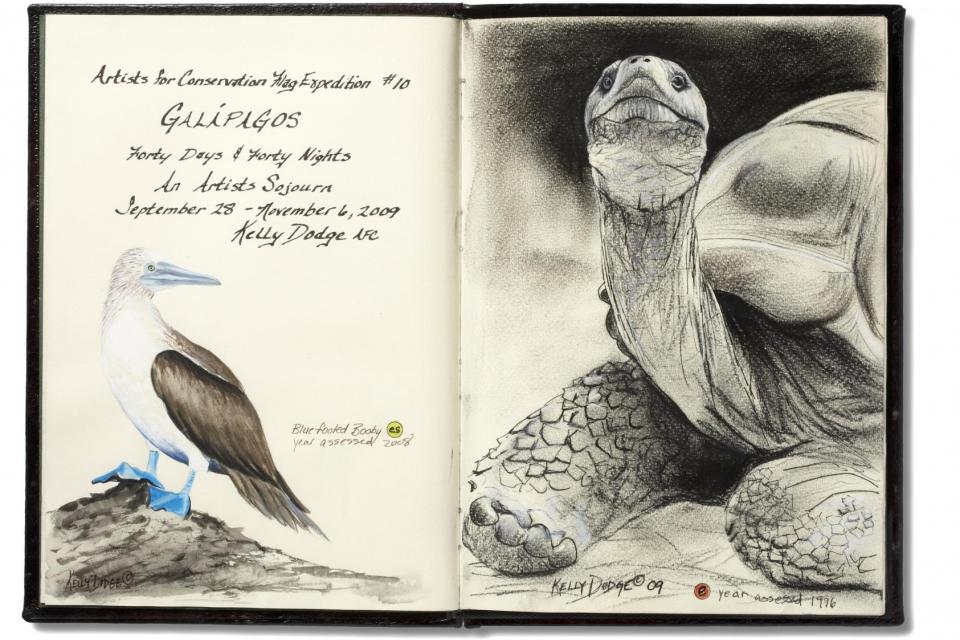 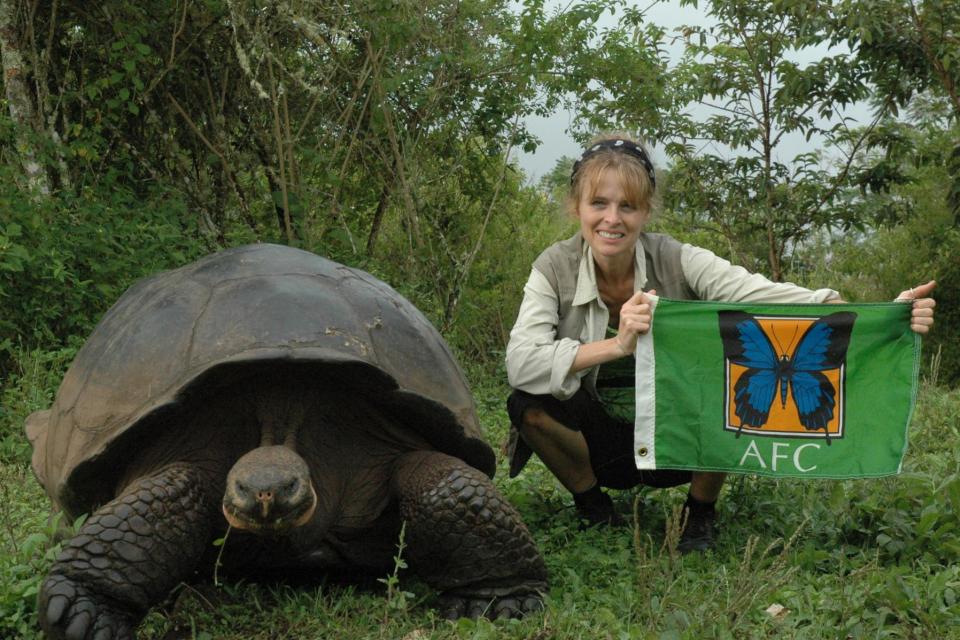