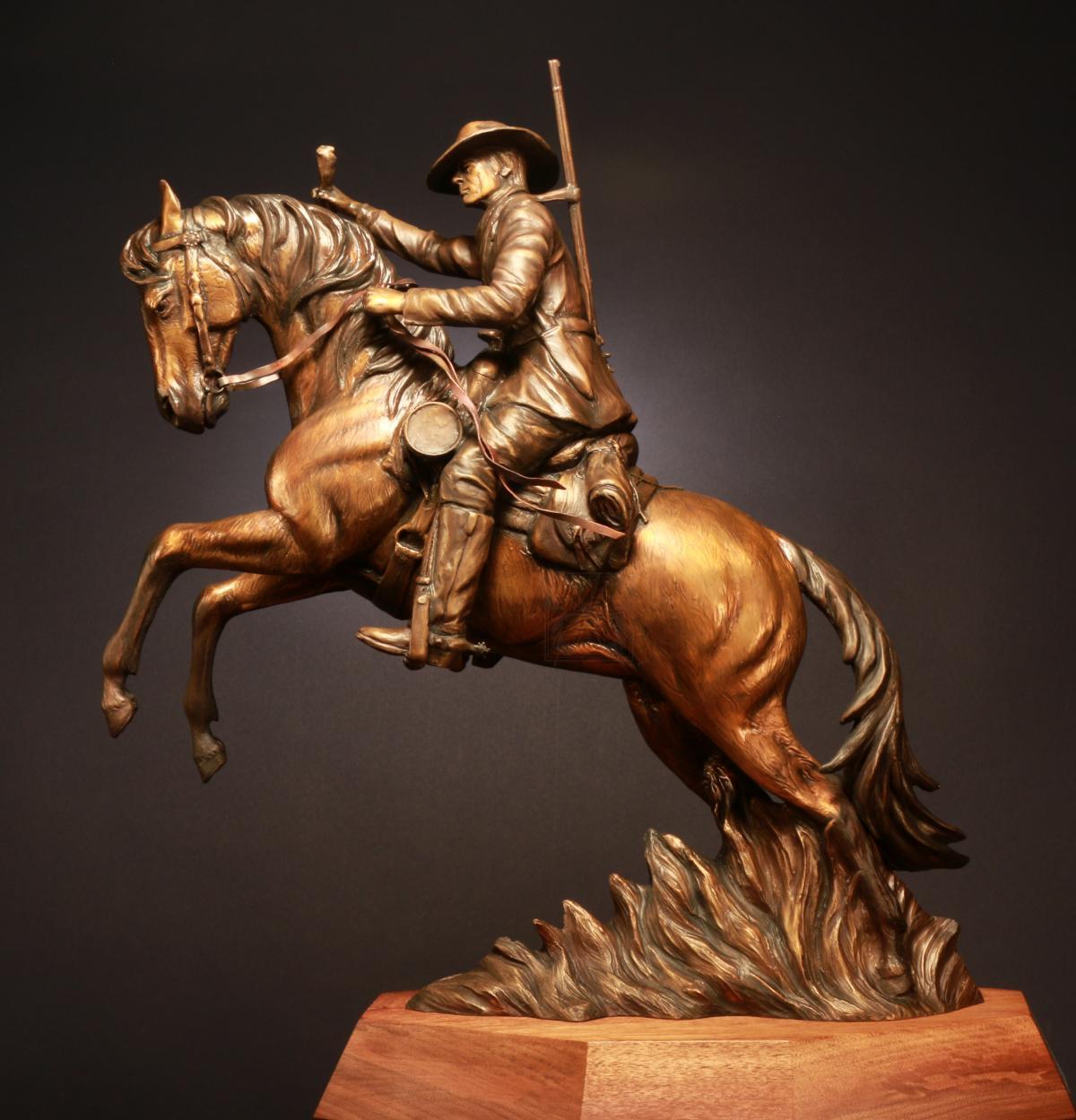 Clink on this link for video on sculpture        https://youtu.be/AfkCFhnqwds

THE MESSENGER’’ a monumental bronze of John W. Smith for San Antonio, TX. Smith was the last messenger sent by Lt. Col William B. Travis. in 1836. He rode out to get reinforcements for the Alamo. The sculpture is 12.5 feet in height and placed at the Alamo. It is also included in the Alamo Sculpture Trail, which will include 14 bronze sculptures, placed between the Alamo and the Briscoe Western Art Museum, and dedicated in 2018 during San Antonio, tricentennial celebration. Bronze maquettes height 21.5’’H 19’’ L W- 8.5’’ are available limited edition 50

It is an honor to have my monumental bronze sculpture ‘’THE MESSENGER’’ installed April 29,2019 at the Alamo, San Antonio. TX. ‘’THE MESSENGER is a memorial to John W. Smith, The monumental bronze is 12.5 feet in height and placed on the Alamo Sculpture Trail, which will include 14 bronze sculptures, placed between the Alamo and the Briscoe Western Art Museum.   The sculpture can be viewed in the Calvary Courtyard at the Alamo.  chrisnavarro.com

On February 24, 1836, William Barret Travis, Commander of the Texian rebels in the former mission known as the Alamo, wrote a plea for help as they were surrounded by enemy forces under Mexican dictator Santa Anna. Addressed to “The People of Texas and All Americans in the world” and signed “Victory or Death,” this letter is known as one of the most stirring documents in American history.

Commandancy of the The Alamo

To the People of Texas & All Americans in the World-

I am besieged, by a thousand or more of the Mexicans under Santa Anna – I have sustained a continual Bombardment & cannonade for 24 hours & have not lost a man – The enemy has demanded a surrender at discretion, otherwise, the garrison are to be put to the sword, if the fort is taken – I have answered the demand with a cannon shot, & our flag still waves proudly from the walls – I shall never surrender or retreat. Then, I call on you in the name of Liberty, of patriotism & everything dear to the American character, to come to our aid, with all dispatch – The enemy is receiving reinforcements daily & will no doubt increase to three or four thousand in four or five days. If this call is neglected, I am determined to sustain myself as long as possible & die like a soldier who never forgets what is due to his own honor & that of his country – Victory or Death.