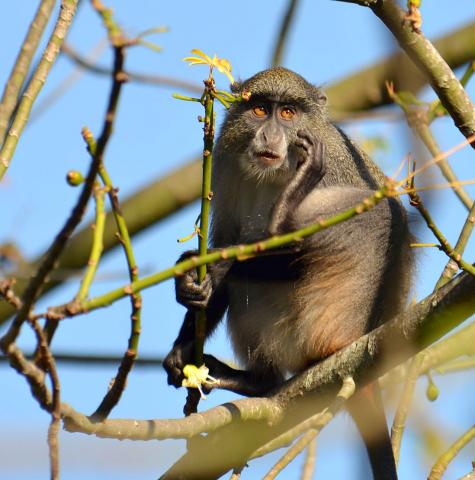 I was recently contacted by a couple desperately trying to Save the forested area that they have so vigorously defended to save the existing Samango Monkey (CERCOPITHECUS MITIS) in Mozambique.

I agreed to donate two paintings to enable them to raise much needed funds.

The first painting is a portrait of a Samango Monkey. The references for this painting were kindly supplied by Havard Rosenlund and O’D Pixley.

The second painting is of the endangered orangutan and the reference material for this was kindly supplied by the Perth Zoo and Paul Green.

If anyone wishes to make contact with O’D and Val Pixley their details are below the information they supplied.

If there is anyone interested in auctioning these paintings for them (I have pledged 100 percent of the proceeds) to the Pixleys towards saving the forests which will in turn result in a safe haven for the Samango Monkey.

I understand that the world is indeed in crisis mode with this pandemic and it seems like the world has been thrown upside down and on its ear. Charities are desperately seeking funds as are many people due to the extreme circumstances. But this is one small way that I am able to contribute and hopefully there will be others prepared to help too.

If it wasn't for the constant effort of the people on the ground with their ongoing battles against wildlife crime, and large scale corruption the planet would be in an even worse state than it is at this moment in time. We cannot just give up and let the destruction continue unabated.

"WE HAVE TO KEEP THE PRESSURE ON TO SAVE OUR PRECIOUS WILDLIFE AND THE FRAGILE ENVIRONMENT THEY INHABIT"……..Paula Wiegmink 2021

OF THE NHAMACOA FOREST, MOZAMBIQUE

Last month, we received a notification from the police in the nearby village of Macate. It was simply addressed to “O’D” and it stated that under Article 83 of a Penal Process, “O’D” was to report to the police at 10.00 a.m. the next morning. If he failed to appear, the police would come to our house in the Nhamacoa forest to capture and arrest him!

We didn’t have the faintest idea what this Article 83 was all about but a visit to the police soon enlightened us. Someone wanted to bring hunters into the Nhamacoa forest in order to shoot and kill all our monkeys.

When we first went to live in the Nhamacoa forest in the heart of Mozambique in 1995, the forest was wild and stretched as far as the eye could see and beyond.  Then people started coming into it, slashing and burning, to open fields and to illegally chop down the beautiful and valuable indigenous trees and turn them into charcoal for sale in the towns.

As more and more  of the forest was destroyed and more and more people arrived, all sorts of birds and animals and reptiles fled into the trees around our house for refuge. There were the large rock monitor lizards that gave our cook, Douglas, a terrible fright because he thought they were crocodiles; the bush babies that ran across our roof at night and woke us up with their screams; the bark of bushbuck; the rare Vangas nesting in our tallest trees and producing two young every year; the ‘near threatened’ very poisonous Gaboon adder and the scarce Gold banded forester butterfly.

And then there were the strange, chunky monkeys with their bristling eyebrows, white chins and black arms that looked as if they were wearing long, black, furry gloves. Monkeys that made a series of clicking sounds, Gr r r rs, the occasional deep BOOM! and ah ah ah ah AH! alarm calls.  The arboreal Samango monkeys, endangered in South Africa.

While many wild animals and two thirds of primates have become extinct around the world, the trees around our house teem with wildlife and the Samango monkey population, in particular, has increased ... and increased … exploded, actually!

Gobbling up all our paw paws, mangos, tangerines, bananas, oranges, guavas, cashew nuts, pineapples, mulberries, lychees and leaving little or nothing for us, you would think that the Nhamacoa Samangos must surely be the fattest monkeys in all Africa!

However, there is a downside.  Although our ever-increasing monkey population could be considered a conservation success – in a tiny way – the downside is that the Nhamacoa forest is now too small for all the monkeys, especially as they produce young every year and live up to 24 years of age.

In the last two years, running out of space and out of food, hungry Samangos have even started eating the lemons off our lemon trees, our unripe avocados, as well as the flowers off our kapok trees, something they have never done before. This year, they haven’t even waited for the kapok flowers to bloom but have already started eating the little flower buds.

Tightly encircled by subsistence farmers, the Nhamacoa forest is only about 70 acres in size and the monkeys are trapped here, with nowhere else to go.  The problem was exacerbated in 2019 by Cyclone Idai which tore up hundreds of our large trees and many smaller ones and again this year when we were in the direct path of Cyclone Chalane and lost more trees.

The only solution is to increase the area of the Nhamacoa forest by buying out some of the subsistence farmers who want to sell their fields on our boundary and reforest them.

To help us with this aim, Paula Wiegmink, the multi-award winning wildlife artist who lives in Australia and who painted ‘Tears of the Rhino’ in her work with rhino conservation, has kindly donated two of her paintings for us to put up for auction to raise funds.  Hopefully, we will be able to find an auctioneer.

Although small and cyclone-battered, the Nhamacoa is still an enchanting little forest and while it seems that the majority of people consider small forests and their animals not worth the trouble of protecting, it is our very strong opinion that in a modern culture that is wilfully destroying our planet, every small creature is worth saving.

And that is why we will resist every effort by the local population living around us to send in hunters to kill our monkeys and to cause chaos in a peaceful, leafy green haven, the last remnant of a once great and beautiful indigenous forest.

If anyone wants to know more, they can contact me at odonnel.pixley@gmail.com.

Reaching for the moon