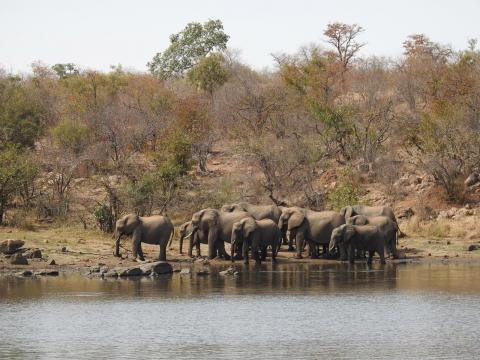 After a leisurely rise, Russell & Janice said they wanted to take us into the southern region of the Kruger National Park. We set off about midday and our entry point was the Phabeni Gate There was much anticipation as to what might unfold during the course of the afternoon.

The day turned out to be extremely bountiful. We had the most amazing sightings and got treated to the big 5! This was just a perfect start to this expedition as this was my travelling companion David’s  first visit to Africa. I told David that he mustn’t expect this every day from now on as it was indeed a major treat, not only for him but for me as well! Africa put on a wonderful show setting a very high precedent indeed!

Couldn’t make out if this spotted hyaena was heavily pregnant or just engorged from a large feed?

Russell and Janice wanted to take us for a full day into the Kruger Park so we decided on an early start. Got up, had tea and rusks and set off for the Phabeni gate arriving at 7:30 thinking we had a good head start.

WRONG – we forgot it was a Sunday and school holidays so there was a queue a mile long!

We made our way to Skakuza where we decided to have brunch as we were all starting to feel hungry. This place holds a very special memory for me as it is where my husband Menno and I honeymooned 35 years ago! Unfortunately Menno wasn’t with me on this trip but maybe next time.

Skakuza outlook over the river just as I remember it

After brunch we made our way from Skakuza to the Lower Sabie stopping at a bird hide on the way. There were quite a few professional photographers in the hide set up with some very serious cameras. Some of which boasted the biggest, longest lenses I have ever seen with the added advantage of a camouflage finish! Very impressive!

Here we spotted a large crocodile and a few water birds

We continued on our way and when we arrived at a large bridge there were lots of cars parked, obviously something was going on? We couldn’t even get onto the bridge so we stopped just before the entry point with a small gap between us and the car in front. A car came off the bridge driving past us so we flagged him down to ask him what was happening. He told us there was a couple of rhino’s having a fight on the river bed and it was pretty heated. The next moment two female rhinos came rushing up an embankment towards our car with a very disgruntled male rhino in hot pursuit. The females ran past us, one behind the other in close proximity through the narrow gap between us and the car in front. Then shortly after in hot pursuit came the male bounding up the embankment. The male suddenly stopped abruptly right in front of our car and turned his head directly towards us, eyeballing the car! At this point I must admit I felt decidedly uncomfortable! I was thinking that if he thought our vehicle, which was grey in colour resembled a rhino we were in deep trouble as there was nowhere to go. There was not only a car in front of us there was also now a whole line of cars behind us too. We couldn’t have made an escape either right or left as it was too steep and also heavily wooded. I took a deep breath as this moment froze in time, hoping he would continue on his way. Much to our relief he decided the females demanded more attention and he trotted off much to our relief. By now with the action over the cars started moving on. We were able to drive forwards onto the bridge to give us a better vantage point of the goings on, on the opposite side of the bridge. The two females were standing quietly to one side while the male huffed and puffed, screeching angrily, trotting two and fro. Quite a spectacle as at times all four legs were off the ground as he seemed to effortlessly move around. Dont mess with an angry rhino!

A little later in the day we could not believe our luck! We spotted no less than 22 lions basking on rocks in the warmth of the day. Beautiful females preening their babies and young adults! They mingled happily moving from one group of rocks to the other. We spent quite a bit of time here soaking in this spectacle of the wild.

We made our way back via the S21 towards Skakuza and arrived just in time with only five minutes to closing! We headed back to White River with a short stop at Tanamera Lodge for sundowners. Another awesome day! Once again spotting all of the the big five plus a few extra birds and a variety of other animals! Wow, two days in a row the big5, how lucky were we!

On our way back we were treated to a sundowner at the beautiful Tanamera Lodge situated on the edge of a gorge. A spectacular view and amazing place.

The end of another perfect day in Africa

If you would like to read about this trip please visit my blog for the full journey: https://artbypaula.wordpress.com/