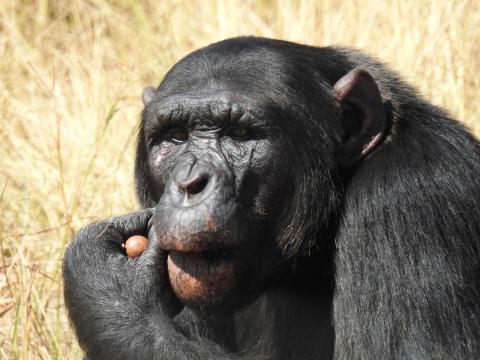 While on a research trip recently to South Africa, together with a friend, we visited the Jane Goodall Institute ‘Chimp Eden’, situated in the Umhloti Nature Reserve, 15 kilometres outside Nelspruit.

Cissy and Paula at the entrance of Chimp Eden

Chimp Eden sanctuary  was established in 2006 as part of the Jane Goodall Institute and was set up as a safe haven for chimpanzees that have been rescued from a life of unbelievable abuse and illegal trade.

On arrival just as the tour was about to begin, we quickly paid our entrance fee and rushed outside eager not to miss a thing.

There was quite a large group of people and we had to try to find a good spot,  not only for taking photos but so that we could also adequately hear the presentation.

Many of the chimps were gathered around, each with their own personalities and identities. One of the larger animals sat perched on top of an anthill. Another kept his distance way on top of the branch of a nearby tree.

Chantelle, our tour guide on duty lovingly introduced us to each chimp by name. Among others we met Charles, Nina and Cozy.

The animals were in a large natural open air enclosure surrounded by bushes, trees and an anthill. The surrounding wire fence erected to keep the chimps safe was also to keep the visitors segregated for obvious reasons.

As Chantelle’s  stories of the chimps previous lives unfolded I was grateful that I had kept my sunglasses on. Each story more sad than the next my tears flowed uncontrollably down my cheeks. Listening to the plight of each chimpanzee I was deeply affected by their life stories.

The photo speaks for itself

We were informed that a male named Cosy liked to throw things. Cosy’s throwing escapades had in the past wreaked havoc. On one occasion one of Cosy’s missiles had inadvertently broken someone’s nose as well as a camera lens. We were instructed to follow Chantelle closely as she lead us around the perimeter of the enclosure to a nearby viewing platform. On the other side of the enclosure we were joined by some of the chimps who followed alongside us equally as curious of us as we were of them. We were warned to take care as  Cosy was waiting for us. Standing tall in an upright position he was posturing to make sure we knew who was boss. Or at least that’s what he wanted us to think.

When we climbed the stairs to the platform we had a choice of standing either behind a protective screen or out in the open where when given the command we had to ‘Duck’ to avoid Cosy’s missiles and excellent throwing skills. Poor Cosy soon worked himself into a complete vocal and physical frenzy as he collected nut shells in preparation to unleash them with force at us. He continued to do this in bursts throughout Chantelle’s talk even though she constantly tried to reassure him that all was well.

Poor Cosy building up to hurl his missiles

Having previously been told of the extreme circumstances of Cosy’s life before he was rescued we understood completely how this animals frustration and anger was aimed squarely at humans.

Cosy who had been owned by a gypsy had lived in the back of a caravan for more than seven years. The details of Cosy’s life were extreme and this poor animal had been abused in the worst possible way. My heart broke into pieces knowing what he had endured and yet somehow managed  to survive.

During one of Cosy’s vocal and physical expressions a submissive female named Nina cautiously approached him in sympathy of his demeanor but also aware that she too could be on the receiving end of Cosy’s temper. If Cosy’s behavior got out of hand the older males apparently would put him in his place.

One of the oldest chimps has reached the grand old age of 72 years despite having lived a life of misery until his rescue.

Another chimp at the time of rescue was both a chain smoker and an alcoholic. Before being able to be introduced to the other animals he had to go into detox and underwent terrible withdrawals. Today he still has cravings and when he sees someone smoking he begs for a cigarette. Why any human would inflict these human vices on an animal is beyond my comprehension!

A group coming to see what the commotion is after one of Cosy’s tirades.

It was Nina’s story that really captured our hearts as her story unfolded. Nina was confiscated from bush meat hunters in Sudan and from there was transferred to a zoo in the town of WAU. Eventually she was taken to a safe house and from there went into quarantine in 2007.

Brought up in captivity she had never know what it was to be naturally and foremost a wild chimp. On her arrival at Chimp Eden Nina was put onto contraceptives due to the fact that none of the chimps who had entered this haven could ever be introduced back into the wild and therefore breeding is not an option. They would however be able to live out the rest of their lives in peace unencumbered by human exploits.

Some time later it was noticed that Nina’s eating habits had changed and she had become lethargic and kept to herself. It was time to call in a vet to get to the bottom of Nina’s drastic change in health. After careful examination and blood tests  it was discovered much to everyone’s astonishment that Nina was pregnant. When baby Thabu arrived on January 23rd 2013 he brought untold joy to everyone in the sanctuary but there was immediate concern when it was evident that Nina had no mothering skills.

As Nina had never had the opportunity to learn from other chimps she was at a complete loss as how and what to do with her baby. Everyone was extremely concerned as they did not want to remove the newly born Thabu from his mother. How could they teach Nina how to breast feed Thabu? In desperation they decided to show Nina a video on an ipad of a chimp mum feeding her baby. However Nina was more curious about the ipad than the video on it. What were they going to do?

Fortunately there was a lady who had just given birth and was breastfeeding and she volunteered to come in and let Nina observe her feeding her own ba. It was worth a try to time was running out.

Nina watched as the mother fed her child and was very curious about what was happening. Well to everyone’s astonishment when Nina went back to her own enclose she lifted baby Thabu into her arms and started cuddling him and put him to her breast!

How could anyone deny the intelligence of these amazing animals?

After a very informative and interesting but heartbreaking presentation my friend and I decided to adopt Nina on 7 August 2016.  It was the least we could do for this incredible mother Nina and her precious baby Thabu.

“Systematically humans are destroying the planet. Filled with greed and hate and ultimately for what? We are born and we die and you can’t take anything with you. At least we should try to preserve what is here for future generations”   ~ Paula Wiegmink