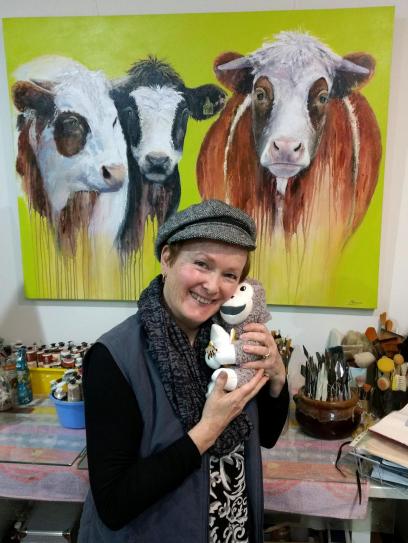 Paula Wiegmink was born in Zimbabwe and is now based in Dunsborough, South Western Australia. Paula had the privilege of growing up in Africa where she soon developed a love for the bush and abundant wildlife. Her interest in drawing and painting emerged at a very early age. Encouraged by her mother, she started sketching animals on the farm and doing portraits of anyone willing to sit still long enough!

After spending 12 years training in the RAD - Royal academy of Dancing classical ballet method Paula performed with the Rhodesia National Ballet. She taught dancing for 25 years, as well as conducting art classes at a private school in Harare.

After migrating to Johannesburg, South Africa in 1979, she resumed her career teaching classical ballet and modern dance and judged numerous dance festivals, bursaries and competitions. During this time she studied at the Da Vinci Fine Art Studio under the expert guidance of the late Carlo Sdoya. Paula's first exhibited painting, 'Homeward Bound', with the Brush and Chisel Club, was purchased by the South African Railways.

In 1994, Paula immigrated to Perth, Western Australia with her husband and 2 children. Shortly after joining the Canning Arts Group, Paula was invited to exhibit as 'Artist of the Month'. She then went on to conduct the all media night classes for the next 6 years. Her teaching extended to the RAF retirement Village Club where she conducted art classes for 11 years, as well as private tutoring.

2009, Paula launched her first book titled, ‘Footsteps in Time’ a family journey from the earliest of her ancestors arriving in Africa from 1709 - 2009. The book launch coincided with her first major solo art exhibition, ‘The Winds of Change’.

A South African conservation group invited Paula in 2012, to do a large scale painting of a rhino on ‘World Rhino Day’. WESSA (Wildlife and Environment Society of South Africa) offered their stand as a venue during the ‘Sunday Tribune Garden and Home Show’ at the showgrounds, Pietermaritzburg, South Africa.

Before leaving Australia for South Africa she decided to do a preparatory piece and her painting ‘Tears of the rhino’ – hear my voice was born. This painting emerged from deep within and turned out to be a very confronting image. Paula decided not to sell ‘Tears of the rhino’ but to rather use it as a tool to raise awareness of the global destruction of the rhino species.

Paula donated her time as host and artist in residence for her first African Art Safari to Zimbabwe, in 2013, raising $6000 AUD for the SAVE African Rhino Foundation.

In 2014, Paula’s painting ‘To the point’ of an African pale chanting goshawk was shortlisted for exhibition with the ‘David Shepherd Wildlife Artist of the Year’ in London. Meeting David Shepherd in person on opening night at the Mall Galleries, Mall Street London was the highlight of her trip.

2015, Coolamon Rotary, Australia asked for permission to use the image of ‘Tears of the rhino’ for the international One fight, Unite- SAY NO awareness poster campaign. The poster is being signed by influential high profile people from all over the world. To date those who have signed are: Dr Jane Goodall, Sir David Attenborough, Noam Chompsky, Ricky Gervais among many others. https://www.facebook.com/rages.one.fight.unite/

2015, CEO Graeme Stevenson invited Paula to appear on the television art program ‘Colour in Your Life’ featuring her painting ‘Tears of the rhino’. The CIYL series has now gone global. The painting Paula recreated on the show has been donated to the One Fight Unite cause.

In 2015, the Canadian based ‘Artists for Conservation’ awarded Paula the June monthly honour for outstanding artistic talent and extraordinary contribution to the conservation cause. Paula was invited to exhibit at the 2015,  2016 annual live exhibition in Vancouver, BC where she featured as international guest youth art instructor.

One of Paula's paintings 'Into oblivion' was selected for the 2016 touring exhibition to the Arizona, USA-Sonora Desert Museum (ASDM) 2016 and then onto the ‘International Exhibit of Nature in Art’ - Asia-Pacific Tour premiering in Qingdao City China.

Paula hopes to create awareness and draw attention to the fragility of the natural world by expressing her passion for life through the images she creates. While using a multi-layering techniques in various mediums, Paula also enjoys experimenting with texture and colour. She is happiest when surrounded by nature doing what she loves best.

A multi-award winner in oil, pastel, acrylics, watercolour and mixed media, Paula continues to exhibit in both group and solo exhibitions.

Paula has supported the following local and international conservation groups by donating paintings or funds to raise funds:

First Rhino On the Moon 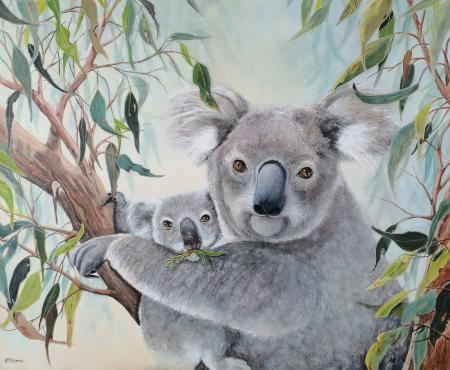