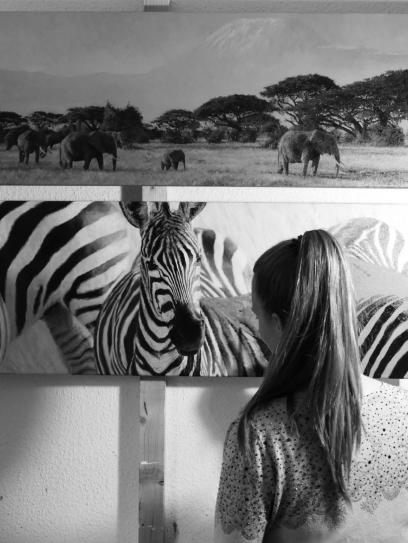 Carina´s passion for the detail of wildlife and nature goes back to her early childhood.
Born in a rather large city (Wuppertal, Germany) she was confronted with a lack of pure nature and wilderness and the only way of bringing animals into her life was the zoo, which she absolutely loved during that time. Moving close to a nature reserve in northern Germany then kindled her artistic career.

After experimenting with acrylics for a while she started taking weekly painting lessons for a year, which influenced her work dramatically. The lessons gave her a first solid set of tools, which she then expanded autodidactically.

Considering the sustainability of paints, she then put aside acrylics and experimented with water-soluble oil paints before moving on to watercolours.

Her mindset as a professional artist developed during her first solo exhibition in 2016 followed by her winning the Hahnemühle calendar art competition for 2017. Being a finalist in the 13th ARC Salon contest as well as in the Wildlife Artist of the Year exhibition in the Mall Galleries in London two years in row (2017/2018) was another important achievement. During that time she was also teaching art at a primary school for a year.

Due to her recent achievements, she established her open-minded attitude towards art. She is of the opinion that the concept of art covers a variety of different things and that they all share one important aspect: Art no matter of what kind, deals with something:

The combination of simplicity and realism helps the viewer focus on the subject and makes him see the beauty that inhabits this planet and that is worth being protected.

Her thorough process of building up the artwork layer upon layer captures this deep fascination and gratitude towards nature and the wild.