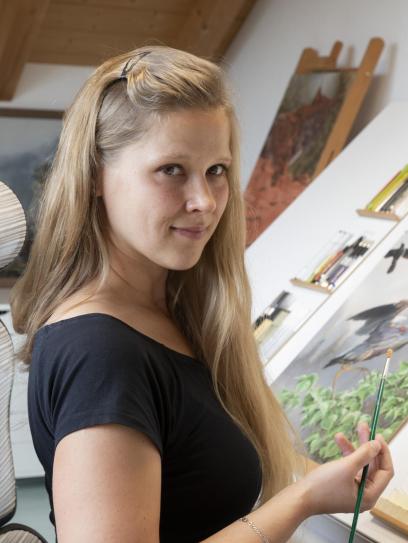 Diana Höhlig was born 1985 in Germany, today she works and resides in Switzerland. Her love for nature and art started with early childhood. Diana grew up in a rural village of Eastern-Germany surrounded by nature and farm animals. Today, Diana describes her relation to the natural world and her art as the true essence of life. She loves the deep, honest feeling of joy to be close to wild animals and the inspiration experienced by trips into nature.

Diana travels locally and internationally, because it is very important for her to find new inspiration in nature and to research her subjects on a personal basis, gathering reference material with her camera and sketchbook.

During her biology study time she spent a half year at the North Sea island Heligoland. Watching the local wildlife and sea bird colonies up-close at the “Red Rock” was a key-experience and important force in her artistic career. Afterwards she begun to focus on bird paintings and won the prestigious German award for bird painters “Silver Owl” in 2013.

Diana also traveled in North America from the west coast of British Columbia to Yellowstone and the Rocky Mountain national parks. Her latest trip to East-Africa was a special artist conservation safari organized by well known, Wildlife Artist and Naturalist Jan Martin McGuire.

Today, her works are shown in national and international exhibitions (Modern Bird Paintings - Germany, DSWF Wildlife Artist of the Year - UK, Birds in Art - Woodson Art Museum, U.S.A., Artists for Conservation, CA). Diana's art is also recognized in international publications like the New European Breeding Bird Atlas, which will show some of her bird illustrations, to be published in 2020. 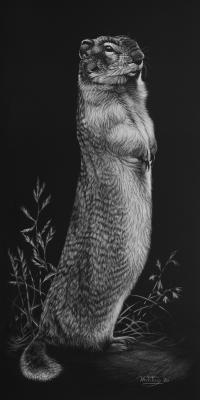