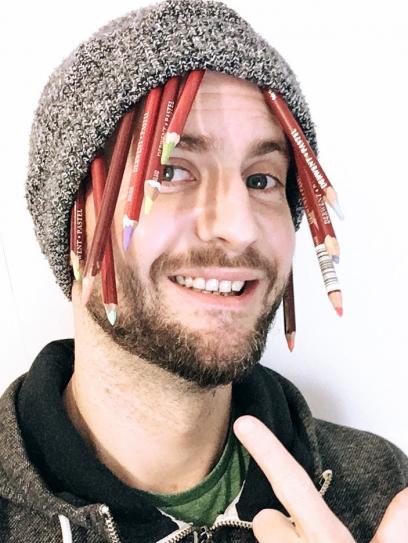 Martin Aveling's passion for drawing was born out of his surroundings art a very young age. While his parents were working to conserve mountain gorillas on the steep forested slopes of the Virunga volcanoes, Martin picked up pencils and drew them.

Martin's inaugural exhibition 'Metamorphosis' (2001) at the Pool Room Gallery in Nairobi was a sell-out success, and other solo exhibitions in Kenya, the UK and the USA have followed. After graduating from the University of Bristol in 2004 with an honours degree in Geography, Martin built his career around his primary passion for art and the natural world. He is a regular on the London wildlife art scene, having exhibited with the Society of Wildlife Artists and at the DSWF ‘Wildlife Artist of the Year’ event, for which he has been a finalist the past eleven years. An award from the Society of Wildlife Artists took him to Indonesia in 2008, fulfilling an ambition to observe orangutans in the wild. He also designed one of the elephants for the capital’s biggest public art exhibition to date, ‘Elephant Parade London 2010′, and a crocodile for ‘Jungle City’ in Edinburgh 2011, raising funds for Asian elephant conservation.

In 2010 Martin drew the first illustration of the newly discovered Myanmar Snub-nosed monkey. During Easter 2012 his three foot high ‘dinosaur egg’ was installed in central London for the record breaking 'Fabergé Big Egg Hunt'. His work has been auctioned in Paris, and featured in charity auctions hosted by Christie’s and Sotheby’s. He is an ambassador for Derwent pencils and provided the artwork for their current pastel pencil range - his favoured medium for over 20 years. In 2018 Martin was invited on as a signature member for AFC. He is also a founding artist for Tagsmart - the world's only integrated artwork provenance solution.

Martin strives for a clean, contemporary look to his artworks, celebrating the detail in his animal subjects whilst creating hidden environemnts for them to live in. Through his drawings, Martin strives to raise the profile of endangered wildlife around the world and to generate support for its conservation. Among the organisations whose work has benefited from his support are Fauna & Flora International, the David Shepherd Wildlife Foundation,  Orangutan Land Trust, the Orangutan Foundation, Tusk Trust, Elephant Family, For Rangers and rhinosUP.

Click here to really get to know mART:
https://avelingartworks.com/blogs/news/me-myself-and-mart