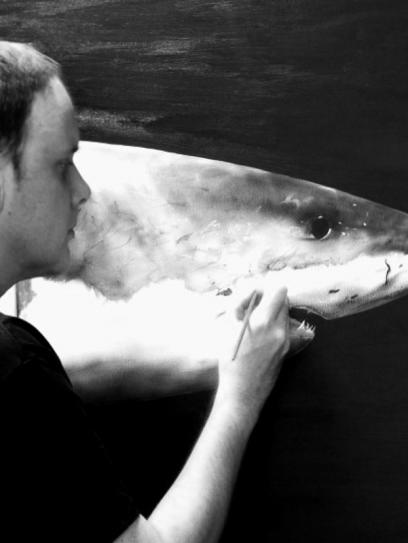 Nick is a British artist who specialises in contemporary marine and wildlife art. Growing up among a family of divers, his passion for the sea and its creatures grew during holidays to destinations by the Red Sea, Caribbean Sea, Atlantic and  Indian Oceans.

Nick's first diving adventures took place at an early age, allowing him to experience first hand the vibrancy and amazing textures of the magnificent fish. Although he had been snorkeling for years already, learning to scuba dive at age 11 allowed Nick to experience the unique effects of light streaming through water and the changes in colours when in deep water.

Nick's experience and artistic talent allowed him to develop a unique style of painting, which combines traditional painting techniques and skills learnt during his years as a custom painter for the motorsport industry. Nick is self taught artist and believes that this has helped him to create his own style of paining and stand out from the crowd .

Although Nick is most well know for his marine life work on his signature black backgrounds, in recent years he has expanded his focus to incorporate metals and high gloss resin adding new textures finishes. Nick used these new materials to bring the sea to life in new and exciting ways not seen before in the art world, such as his new "split level" water effect.

Nick's stunning works have been highly acclaimed by collectors and the Press, appearing in Sport Diver magazine, Marlin, Crest magazine and has been selected as a finalist in the International Wildlife Artist
of the Year Competition every year since 2010, Winning the "Into the Blue " category in 2016.

Over the years I have supported and donated work to: