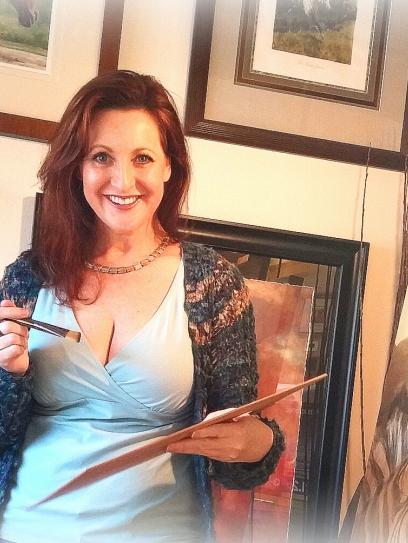 Whitney Kurlan, a self-taught artist, has always had a passionate love of nature and animals, especially horses. Growing up on a horse farm and competing from a young age, equines were a big inspiration and were a major subject early on, but they were not all that garnered the attention of the budding artist. Having been armed with the complete Jacques Cousteau books, a library of wildlife journals, magazines and books, along with weekly programs like Mutual of Omaha'sWild Kingdom, Whitney could rattle off rare wildlife species by the time she was 4 yrs old.

"I knew early on in my life having been surrounded by a myriad of animals, they would feature prominently somehow in my life. When I saw the movie "Born Free" for the first time I was around 6yrs old, I remember distinctly having an emotional respose so strongly,  It was if I had been there before, the pull of the scenery and the animals, it reasonated so strongly with me, even at an early age, I knew there would never be anyplace else that captured my heart so competely. It cemented my awareness of conservation, including the lengths ordinary people will go through to help save our wildlife. I knew I wanted to be a part of that world somehow".

While attending college in CT, She won the congressional award for exemplementary skill in watercolors, and was chosen to work with American Modern Conceptual artist Sol LeWitt. Whitney decided to follow with one of her first loves to work with horses, and had a successful career in equine nutrition and digestion for over 15yrs,during that time her artwork took a backseat. In 2012 she had an unfortunate spinal accident which ended her working career, however it opened the door to return to her artwork full time.

Whitney decided to go back to school in 2018, she was accepted into the Tufts University Museum School of Fine Arts in Boston, MA, where she focused on Illustration and graphic design. With a focus on wildlife her intent was to create labels for the beverage industry with her design work. Her work has been featured in several newspapers and publications including: Outdoor Life, New England Horse Magazine and CT Post. Her artwork has been selected as the image for multiple national horse shows, zoo events, charity Benefits, theaters and logos over the most recent years.

In 2016 Whitney's painting "When the Dust Settles" was selected to participate in the David Shepard Wildlife Foundation Artist of the Year. As always, Whitney's efforts are dedicated to help endangered species and conservation, in particular those of Africa. This subject matter continues to be in the forefront of her current artwork today. In an effort to fulfill a personal goal, she now partners with a few companies and individuals, based both in South Africa and locally on the homefront. She gives her time and artwork to charities that work with and support animals and the environment in conflict.

In 2018 Whitney was asked to work on the Art Committee for Zoo New England, she consulted on programs for conservation awareness and donated her work to help support their efforts. Whitney moved to Aiken, SC in 2019, where she is now teaching and continuing to paint. She is working with a variety of non-profits both locally and Nationally on endangered and critical species. She is also working on illustrating a series picture books for children. Whitney was just honored to be elected into the Pastel Society of America, NY. She is one of the very few wildlife pastel artists in the society. She is a member of the Connecticut Academy of Fine Arts, Concord Art Association, Kent Art Association and the CT Pastel Society. She is available for workshops and instruction. www.whitneykurlan.com

“For me, It's about making a difference. Using my artwork as a voice for those who do not have one. It's about striving to be the best you can be so you can give back those gifts which you have been endowed with, so you can make an impact no matter how small, on the lives of others"

Whitney in the past couple of years has primarily has been focused on African and Asian endangered species. Partnering with several individuals in South Africa for reference material as well as supporting an eco based safari company in Tanzania, she gives a percentage of her profits to support the local people as well as continuing to give back to wildlife conservation and preservation with the sales of her endangered wildlife artwork. In 2018 Whitney was recently selected to work on the board for the art committee for Zoo New England to help with their continuing efforts in conservation. Their gene studies and projects to help raise money for further exhibits and conservation efforts, sparked Whitney's intrest where she helped support their efforts through donation and consultation.

Currently Whitney is working on her "Vanishing Wildlife Series" featuring endangered species of Africa primarily. She is in contact with the HItchock Woods Foundation to partner with them on an exhibit of work surrounding the endangered Cockaded Woodpecker right in her home town of Aiken SC.

Elected Member of the Pastel Society of America