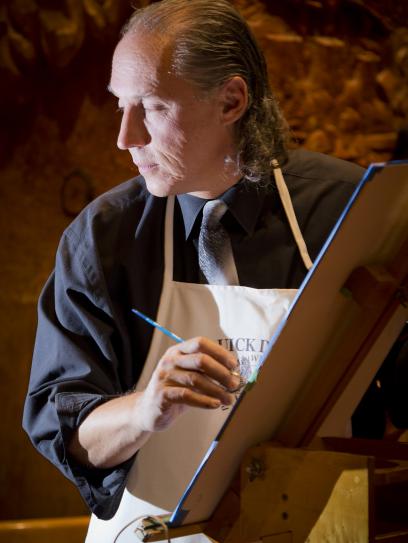 Born in Toronto, Ontario, Canada, David's appreciation of nature began in his youth, as he explored the Canadian outdoors.  When his home country travel began to include air travel, he realized that the whole world was only a plane trip away, and from then on embarked on longer reference gathering trips to places like Africa, India and Nepal, North, South and Central America.  In the meantime, David taught himself to draw and paint, experimenting with a variety of media and techniques.

Because of his love of wildlife, David had initially geared his education towards becoming a veterinarian, believing that creating art was merely a hobby.  Throughout his youth David continued to received support and encouragement from his mother and remembers “special occasions” when he was allowed to stay up late on school nights to finish a drawing – he still vividly recollects one of the last things his mother said to him: "Don't let anyone ever tell you that you are not an artist."  Unfortunately soon after, at the age of 17, David lost that source of support in a tragic manner, when his mother was murdered by his father.  This terrible event impacted David's life, and that of his four younger siblings in immeasurable ways.  Introduced abruptly into the adult world, David had to find ways to support himself and secure his future, so he gave up his dream of attending university, and started work at a local factory.

Constantly seeking out opportunities to create led to the completion of drawings and paintings that began to garner attention, opening a door to a world he had not known existed.  It was then that he decided to pursue a degree in art, hoping this would further demonstrate his professional commitment and enhance his credibility.  Fending for himself, David overcame incredible odds and eventually graduated with honours from the Ontario College of Art.

David has always been intrigued by nature’s intricate details.  As he likes to point out, “God is an amazing designer.  The closer you look,the more there is to see…”  It is this intricacy, combined with the subtleties of mood and environment that David attempts to capture in his artwork.  His paintings and drawings have gained recognition and are part of corporate and private collections the world over.  David is a member of the Artists for Conservation (AFC) foundation and of the prestigious Society of Animal Artists (SAA), and has been invited to exhibit in some of North America's major art shows, where he has received a number of Best of Show and Excellence awards.

In 1993 David relocated his studio to Calgary, Alberta, where besides painting, David holds regular weekly art classes.  His travels often involve research trips or teaching workshops, where he enjoys learning more about the natural world or sharing his passion for nature and art with the many students in his art classes and workshops.  A strong supporter of conservation projects and of his community, David continues to donate works for fund-raising efforts by numerous organizations. David’s reputation as an innovative artist, an enthusiastic teacher, and a passionate conservationist, has led to several articles, instructional DVDs, speaking engagements, and AFC’s first Flag Expedition.  People are often told to “stop and smell the roses.”  As a visual artist, David uses his work to remind us to stop and look at the beauty that surrounds us.

David was awarded the first fellowship grant under the AFC's Flag Expeditions Program for his proposal "Expedition to Observe and Portray the Endangered Harpy Eagle and its Habitat". Following what is likely the most extensive artistic study of the Harpy Eagle ever attempted, the resulting artwork will be used to support conservation efforts to restore the Harpy Eagle to its historical ranges, while helping to educate the public on the key role this species plays in the maintenance of a healthy ecosystem.

A strong supporter of conservation projects and of his community, David continues to donate works in support of numerous other organizations, including:

When painting, David has two primary objectives: to bring the "wild" within reach of those who have not had the opportunity to experience it for themselves, and to provide a permanent reminder to those who have. David has always been intrigued by nature's intricate details. As he likes to point out...
Read more... 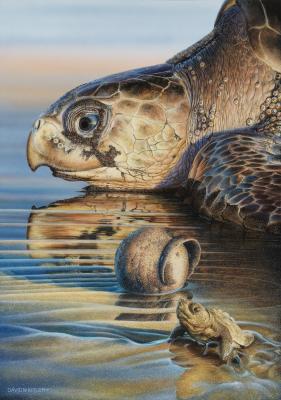