Hi, my name is, Casey Nadine Banwell, I’d like to start by thanking you for your interest in my work.

From a very young age, growing up in the fields and woodlands of Somerset.

I have been lucky enough to always have a close relationship with the natural world which cultivated and inspired my interests as a young anthropologist and animal rights campaigner.

I have also always had a natural ability to sculpt, coupled with a distinct passion and drive to perfect this skill set.

Through this keen interest, I have been lucky enough to find a career in film as a sculptress, which gives me a good solid income, allowing me the privilage in my spare time, to consider the negative impact humankind has towards other species existence and what I can do to help change things.

Through my young adult years, I became an animal rights campaigner, I involved myself in many animal rights causes but would often be left feeling anxious and disheartened because despite scientific evidence and the united message from thousands of people, campaigns would fail, due to lack of political backing, etc.

Until the right people listen, nothing will change in the animal world and that’s the reason for my artistic donations today.

During the first lockdown, whilst people were locked in their own houses worrying for their own fate and the fate of humankind, which has been a very unique experience for most. I realised an opportunity. I now had time, time to create art and turn my creations into action to help save my animal friends, who's fate of extinction has existed like this at the hands of humans without consideration for their loss since the beginning of early man.

It was in the first lockdown, Rango the orangutan was born.

A life-sized bust, cast in cold cast bronze, was sold, and raised over 5500 pounds for charity without me even leaving my front door.

I had contacted charities who were supporting orangutans through various rescue rehabilitation and release programs, and I offered them a Rango to generate funds for their causes.

All took the opportunity to auction/raffle a Rango 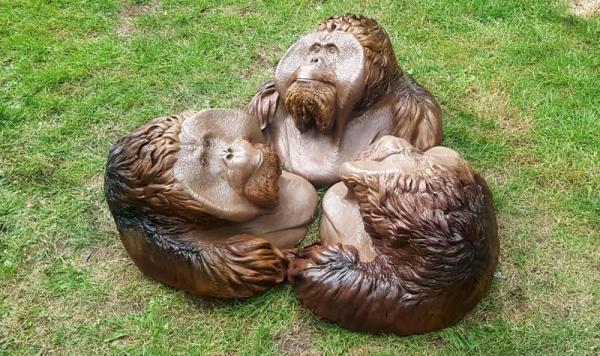 This project was so successful, I couldn’t believe the positive response I got from these charities and how much money could be generated from my art and in such a relatively short space of time.

My art gave charities the opportunity to give something for people’s generosity.

My first reward was footage from Born free, releasing an Orang who had been rescued.

A direct result of the money that had been raised through the sale of my art.

The second reward was a letter from Peta, the money we had raised through Rango sales had gone to changing legislation in film, to ban the use of wild animals and replace them with CGI animation.

The next reward was footage from Saving Nature.

They had raffled a Rango and raised over 3000 pounds and were able to buy 16 acres of rainforest in the Leuser region of Sumatra.

The 16 acres became part of a corridor, reconnecting fragmented areas of rainforest so that animals could move between them safely. The donation was also coupled with a raffle of another sculpt of mine. A sumatran Rhino, mother and baby, raising enough money to continue the purchase of rainforest, continuing the coridor, bringing the total of rainforest purchased, through the sole sail of my art, to 46 acres of rainforest.

I took no payment from these sales, all profit for these pieces goes to conservation and saving my animal friends.

My next reward for me, was footage sent to me by Saving Nature, of the first Orang to use the corridor captured on their camera trap.

I think it was safe to say, I was now totally hooked as tears of happiness streamed down my face.

I had finally found a way of helping my animal friends, directly through my art.

In every piece I sculpt. The anxiety and pain I feel for that species suffering, is all in the clay.

Life saving for the animal the clay depicts.

This is my way of making my own pain stop. I finally feel like I’m doing something.

On this journey, I meet likeminded people like yourselves, who are doing amazing things to help save animals, to give them a voice and their lives back after all the damage man has done for profit and greed.

In these moments, I realise I’m not alone.

All profit raised from the sale of these pieces will go to the protection of the animal from which the piece has been inspired.

What I receive in return for my hard work and involvement in the creation of these pieces is worth more than monetary gain.

I’m paid in a feeling of hope and an element of pride.

United with a people in the fight for animal rights.

As we believe that the exploitation of animals for profit is unnecessary.

We as humans are caretakers for this world not takers and should live up to our name, humanKIND.

Protection was created in June of 2020. Another lockdown creation.

Although the sculpt was created during this time, the first resin was not produced from the mould until July of last year.

I had entered Protection into the Mall Galleries competition, The Natural Eye and was lucky enough to win a place in the exhibition. 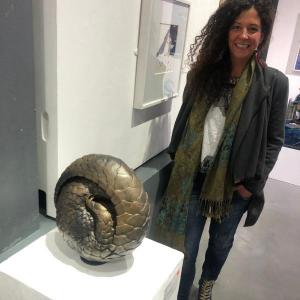 I exhibited the first of a Cold cast resin limited edition, which sold on The Mall gallery website before it had even got to the exhibit.

More subsequent sales followed through different means of exposure. I have taken no money for the making of this piece and the other pieces in this series.

All profits from the sale of Protection after costs, such as gallery commissions, postage etc, went to The Pangolin Project.

The work of Claire Okell and her team at The Pangolin Project in the Maasai Mara, had been introduced to me through an intermediate contact.

Saving Nature had introduced me to Paula Kahumbu , the director of Wildlife Warriors, a series of wildlife documentaries, created by Africans for an African audience.

She had interviewed Claire and her team and was overwhelmed with the amazing work that they had been doing and was sure that any donation from me would be well spent.

We devised a plan to sell 20 Bronzes.  All profit generated from the sale of the limited-edition bronzes, would go to supporting a Pangolin ambassador program.

This program would place representatives in local communities, who would inform and educate the locals in the Mara and would be first on hand when there was a sighting of a Pangolin in distress and in need of help.

Claire Okell, the founder of the Pangolin Project, sold a cold cast bronze piece to one of her donors who was going to loan the piece to number 10 downing street and a sister piece was to be donated to State house in Nairobi, both to be delivered on World Wildlife day as a reminder to protect the pangolin in its natural habitat and with the hope of bringing the two countries together to enforce this happening.

Yep, a big deal. Such a prestigious gesture and the venue deserved a bronze statue. 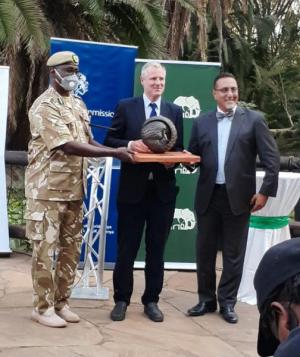 On the 3rd of march. Protection was received by Zac Goldsmith and presented to Hon Sec Balala and now sits in state house with the first lady.

We were invited to install the sister bronze in number 10 downing street, on the balcony, with Audrey Hepworth’s piece situated as a silhouette in the background. 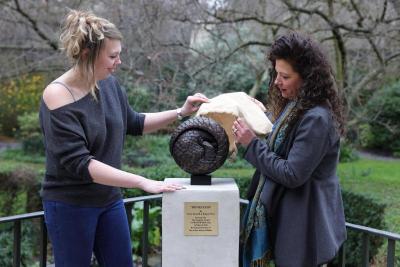 For every sale of this piece, a pangolin is saved for ever in the Masai Mara. To ensure future generations will know what a pangolin is. Protecting it and its natural habitat, for generations to come.

I want to be a part of a people who stood against the destructive nature of humankind.

This is my way. 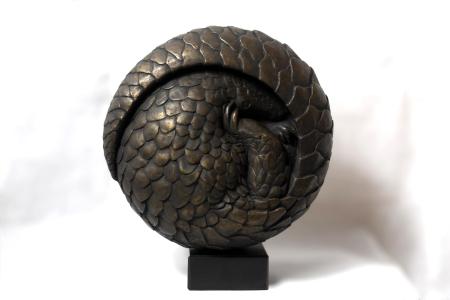