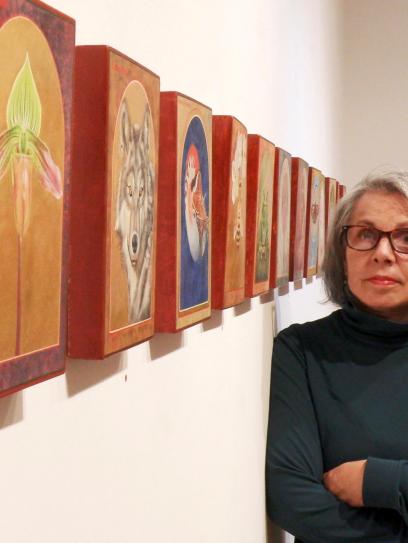 Angela Manno is an award-winning artist based in New York City. Her mediums include encaustic, oils, textile, pastel, as well as egg tempera and gold leaf on wood in creating traditional and contemporary iconography.

A graduate of Bard College, Manno studied art at the San Francisco Art Institute, Parsons School of Design, and l'Ecole des Arts in Lacoste, France. She trained with the contemporary master of batik, Jyotirindra Roy, and studied the ancient liturgical art of Byzantine-Russian iconography with master iconographer, Vladislav Andrejev.

Her major solo exhibition, Conscious Evolution: The World At One, toured internationally and was seen by more than a quarter of a million people. With the support of private and corporate sponsors—including actor Tom Hanks, AXA Space, and Prince Sultan bin Salman bin Abdul-Aziz of Saudi Arabia—the artwork featured in the exhibition became part of the permanent fine art collection of the Smithsonian Institution's National Air and Space Museum.

Her work has been featured in numerous solo and group exhibitions at distinguished venues, including: the National Museum of Women in the Arts in Washington, D.C, the Smithsonian Institution, the American Museum of Natural History in New York City, and other museums around the world. Her work is part of the permanent NASA space art collection at the Kennedy Space Center, and is held in private collections throughout the U.S. and abroad. Her plein air landscapes are collected around the world and are featured in the French documentary film Voyage au Pays des Lavandes (Journey to Lavender Country).

Her current series of work, Endangered Species, applies her iconography training to a contemporary exploration of environmental crisis and extinction.

I am interested in supporting the work of  The Center for Biological Diversity and amplifying the message of the Half Earth Project, whose mission is to preserve half the Earth's land and sea in order to stabilize biodiversity on this planet, as well as other conservation organizations that are working to protect various species I depict in my icons, including The Orangutan Foundation International.  I give 50% of the sales from my original art to these organizations, which allows me not only to bring the plight of these beings into the hearts and minds of people, but to perform the best kind of activism available to me.

It is clear that the Western mind is divorced from Nature, the primary condition that has lead to the current ecological catastrophe. I feel that the only way back - indeed our own survival - depends on nothing less than a re-enchantment with the Earth as a living reality. It is for this reason that I have chosen to depict non-human species in a traditionally religious form - the icon, originating in the monasteries of 14th-16th century Russia - a practice that I have maintained for more than twenty years.

Grants and Awards
2004 Award for Excellence, The National Park Academy of the Arts

Artist Paints Icons of Endangered Species to “foster ecological conversion' The panther's greenish eyes, staring directly at the viewer, are hypnotic. Caught in a moment of calm, etched against a golden background, it seems to be waiting. But this is no ordinary painting. The Florida panther is an...
Read more...