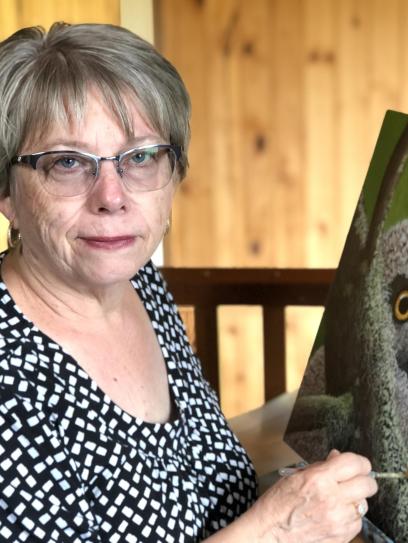 Sandy Moser is an international, award winning artist who is inspired to paint the wild creatures of the world. She is a self-taught artist who has taken many workshops. She has studied with world renowned artists Zoltan Szabo and Cheng- Khee Chee. She has studied wildlife art through a twelve month course from North Light Art School. She has attended many workshops in watercolors, egg tempera and acrylics. Sandy has also studied wildlife art with Canadian artists Ron Decker and Derek Wicks. Her recent realistic paintings of wildlife are painted in acrylics with many glazes, but she also paints animals in gouache, pastels, scratchboard, watercolor and on silk.

The beauty of Nova Scotia and Atlantic Canada has been the inspiration for many of Sandy’s seacapes, landscapes and wildlife paintings. The ocean and lakes provide her with many images from which to paint. Since living along the Eastern Shore of Nova Scotia, she has had the opportunity to study and photograph many species of birds, inparticular, the common loon.

Sandy has won over 100  international awards, of which seven have been “Best of Show”. One of her latest accolades was in September 2020 when her painting “I See You” won first place in the J. Mane Gallery’s “Fins, Feathers & Fur” online competition. Her painting “Momma’s Treasures” also won first place in the “Animals” Art Exhibition for the Art Room Online Gallery this year. Sandy was also a featured artist in the Arabella fine art magazine in September, 2020.

Several of her paintings have been published in two of the Richeson 75 Animals, Birds, and Wildlife books. In May, 2014, Sandy was a featured artist in the Visual Language Magazine. In February 2015 her painting “Friends of Taylor Head” was published the in the book AcrylicWorks2 –Radical Breakthroughs. Also, in 2015 she was a featured artist in the Truro Daily News regarding the “Fins, Fur and Feathers Show” at Visual Voice Gallery in Truro. Two of her paintings of the Eastern Shore are part of the collection at Province House in Halifax, Nova Scotia.

Many of her paintings have been featured in various newspapers, websites and publications. In August of 2020, Her work has been shown on the following online galleries – Still Point Gallery, Artist Portfolio Magazine, Light, Space & Time Gallery, Art Room Online Gallery, Richeson Gallery, Gallery Ring and Leading Artists Gallery.

Sandy’s paintings can be found in private collections in many parts of Canada, the United States, New Zealand and Europe.

Seacoast Trail Arts Association – Founding President - This association was founded to bring together artists to organize and celebrate the diversity of artists living in rural Eastern Shore of Nova Scotia.

Sheet Harbour & Area Chamber of Commerce & Civic Affairs – Tourism Director - I have volunteered with the Chamber for over ten years to help develop nature based in tourism as an economic  boost. I am also a cochair  of the Marina Committee.

Friends of Taylor Head Park – former secretary and director-  This society offers free activities and tours to the public at Taylor Head Provincial Park. Some of these tours include a mushroom walk, botany walk, bird identification, night walk, and more.

Nova Scotia Nature Trust – co chair of the Sustainable Tourism Expansion Program Committee which looked at nature based activities in the 100 Wild Islands.

Wild Islands Tourism Advancement Partnership Committee member. This committee is continuing to work with the Nova Scotia Nature Trust, the provincial departments of Environment, Tourism, Lands and  Forestry and Fisheries. Nature based activities are being developed to increase economic growth for the Eastern Shore of Nova Scotia. I also continue to give my artwork to support the Nature Trust's auctions.

I also give my artwork to help support Hope for Wildlife and Oaklawn Farms.

Snow Leopard Conservancy - I have chosen two of my paintings to be used for prints and cards for the Conservancy to sell. https://snowleopardconservancy.org.