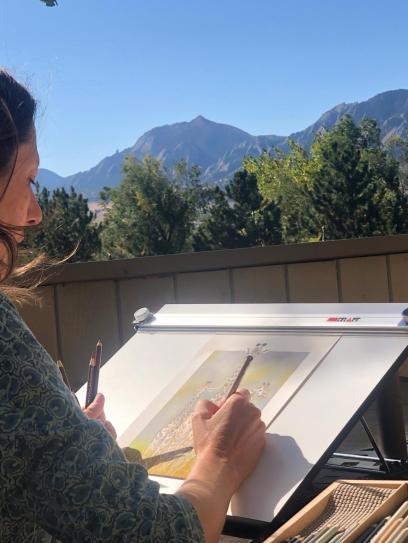 Born in Sao Paulo, Brazil, Rosana's love of art developed at an early age.  With no formal training, she was mentored by the owner of the art and craft store where she worked as a teenager after becoming fascinated by all the colors, kinds of paints and brushes.  Her art remained a hobby done occasionally for her own enjoyment and that of friends who would ask for a mural for a child's bedroom or a decorated birthday cake. She had tried watercolor for a few years and in 2014 bought a small set of colored pencils and some paper so she could “paint” while on business trips.

As a math and exact science enthusiastic, she graduated in 1992 with a degree in Computer Science. After a meant to be meeting with her now husband her career took her to the United States. Since then her work has taken her on projects all over the world consulting in various industries including pharmaceutical, consumer goods, industrial manufacturing, professional services and retail. These contracts have allowed a flexibility to pursue their passion for travel and now wildlife conservation. She currently lives in Boulder, Colorado, USA.

She visited Africa for the first time in 2005 and fell in love with the beauty, smells and sounds of the bush. She often says she was bitten by the African bug and needs a booster shot.

Since 2005 they have made countless trips to Africa visiting over 20 countries.  This includes a particularly memorable 10-month overland trip done in 2012/2013 in a vehicle specially outfitted to allow them to be self-contained.  In the 20,000 miles driven they were privileged to witness life in remote and wild areas. This prompted a shift in lifestyle and priorities.

Rosana has noticed first-hand the decline of wildlife in many National Parks in Africa since her first time. She felt encouraged and driven to find ways to fight the factors contributing to this decline including habitat loss and degradation due to human encroachment, poaching, hunting, wildlife trafficking and poor wildlife conservation management.

After a chance meeting in Africa with Mark Hiley, the founder of National Park Rescue and a virtual meeting with Dr. Niall McCann, the co-founder of National Park Rescue, a great motivation was born to combine her passions for painting and wildlife to support their wonderful work. She has been creating a portfolio to be used in fundraising for their organization. The world definitely needs more Hiley's and McCann's.

She is using her own photographs, the one’s from friends and from two magnificent wildlife photographers and contributors to conservation – Federico Veronesi and Graeme Purdy

Rosana's favorite medium is colored pencils on paper.  It allows her to be creative anywhere in the world by carrying just a very small set.  She continues to experiment with different types of paper and pencils and feels like it is Christmas morning every time a new package of supplies arrives.

In 2019 she fulfilled her dream to watch Dr Jane Goodall speak at a live conference and gave Dr Goodall one of her pieces. 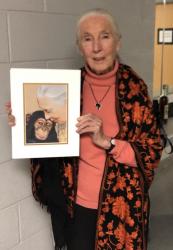 She recounts reading the following and says she could not have described her feelings in a better way when departing Africa:

“The flight back home is the worst. I feel a piece of my soul is left behind in the dark red soil and African bush where wildlife meander.
I hate that I allowed myself to open up my heart and soul to inevitable heartache to leave this continent. Worst is the waiting before my next return. The photos taken will have to feed my soul until then.
If you allow yourself to become lost within, your African experience will open a new world never known before. A world of simplicity. A world of relaxation. A world that simplifies your place on earth. A world that feeds your soul.”

Rosana remains hopeful as she reflects on the words of Dr. Jane Goodall ...

“THERE IS STILL SO MUCH IN THE WORLD WORTH FIGHTING FOR. SO MUCH THAT IS BEAUTIFUL, SO MANY WONDERFUL PEOPLE WORKING TO REVERSE THE HARM, TO HELP ALLEVIATE THE SUFFERING. AND SO MANY YOUNG PEOPLE DEDICATED TO MAKING THIS A BETTER WORLD. ALL CONSPIRING TO INSPIRE US AND TO GIVE US HOPE THAT IT IS NOT TOO LATE TO TURN THINGS AROUND, IF WE ALL DO OUR PART.”