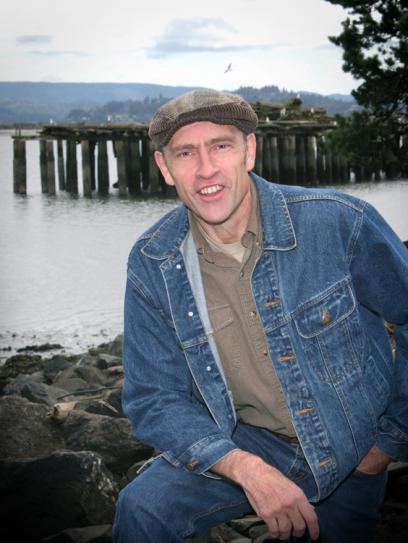 While Terry Woodall has thirty year's experience practicing the technical skills of wood sculpture and studying wildlife subjects, imagination and creative thought play key roles in achieving his expressive art works. Woodall also strives to keep his art works fresh and relevant in a changing natural world as evidenced by his recent exhibition "Sea Life Salt Free" at the Water Resources Education Center of Vancouver, Washington. Sculptures of this exhibition interpreted clashes between threatened wildlife of the West, and also referred to the exotic wildlife observed by Woodall on Lake Baikal, Russia, during an artistic field study.
Beginning in 2007, Woodall has achieved international recognition and numerous awards with his interpretive sculptures of wildlife interactions executed in both wood and bronze. These achievements include twice juried into the Art of Conservation Exhibition at the Hiram Blauvelt Art Museum, New Jersey; twice juried into the Small Works Big Impressions art show of the Society of Animal Artists; juried into their 48th Annual Art and the Animal members exhibition; and work selected for the 14th annual "Art of the Animal Kingdom" exhibition of the Bennington Center of the Arts, Bennington, Vermont. Overlapping with western art, Woodall found a welcome reception at the San Dimas Western Art Exposition in San Dimas, California, which awarded him with a silver and bronze medal for sculpture.
The "Endangered Species; Flora and Fauna in Peril" wildlife art competition and national touring exhibition was a major springboard for Woodall to express his devotion to North American wildlife. Hosted by the Wildling Art Museum in Los Olivios, California, the exhibit, which included a Terry Woodall sculpture, was also presented at the Department of Interior Museum in Washington D.C.
Perhaps the most pivotal experience in Woodall's career came with the Artists for Conservation Foundation Fellowship Award, which gave him the opportunity for an artistic field study to Lake Baikal, Russia. Besides the field study of endemic wildlife of Siberia, this resulted in his illustrated journal published online, a solo art show at the Irkutsk Nature Museum in Irkutsk, Russia, a slide presentation of the expedition at the Hiram Blauvelt Art Museum on the opening night of the "Art of Conservation" art exhibition, and a solo featured artist showing at the 20th annual fund raising event of the Tahoe-Baikal Institute in South Lake Tahoe, California.
As Woodall works on creations of wildlife sculpture most of his working life, he also enjoys managing a small tree farm in his native northwest, salmon fishing, and writing, all mixed in a blend of outdoor inspirations. His writings on wildlife art have been published in Wildlife Art Magazine, the Society of Animal Artists newsletter, Wildscape Magazine of Great Britain, and the online Wildlife Art Journal. Campfire talks on his myrtlewood art and the trees that lend the medium, sponsored by the Oregon State Parks Department, is another venue of sharing his deep appreciation and knowledge of nature.

2007 - Salmon sculptures by Terry Woodall are selected and auctioned for the "Salmon for the Sandy" restoration project, which included removing major fish restricting dams on the Sandy River in the Mount Hood watershed near Portland, Oregon. Western Rivers Conservancy sponsored the project.

2007 - As part of the the 3rd Annual Fort Worden Wildlife and Nature Art Exposition, which featured the sea otter, Terry Woodall creates an installation highlighting the successful re-establishment of the sea otter on the Washington coast. Thirty sea otters are carved representing the original 30 released in 1970, which have grown to over 1000 today. Forty percent of the sales of these otters are donated to the sea otter conservation fund of the Point Defiance Aquarium.

2008 - Embarked upon an artistic field study and conservation effort for the world's only freshwater seal species, the Baikal Seal. This 7th Flag Expedition of the Artists for Conservation Foundation included inquiries into the status of the seals and first hand observations of their activity in the world's deepest lake, Lake Baikal, located in southern Siberia. Twenty per cent of sales of artwork resulting from the expedition will go for conservation efforts on behalf of the seals and their habitat.

After being assisted by the Tahoe-Baikal Institute in the planning and execution of his AFC Flag Expedition to Lake Baikal, Russia, Terry has stayed active with the organization by contributing artwork donations for its annual fundraising events. This included a major sculpture of a Baikal Seal and many smaller carved seals in 2010. In 2012, two 12" golden trout carved in the bright yellow Osage Orange wood were donated. The institute monitors and improves the health of Lake Baikal and Lake Tahoe, and sponsors exchanges of scientists and students.

2014 - One of Terry's signature carved and stained myrtlewood orcas was donated to a fund raiser auction in Chicago titled "Spring Fling for Lolita". The Free Lolita campaign, sponsored by the Orca Network in Whidbey Island, WA, seeks to set free an orca named Lolita that has been held in captivity. Terry is also working on a likeness of Lolita and her mother, Ocean Sun, for a mother calf combination art piece.

Due to their successful debut, the Ocean Sun and Lolita renditions, titled "Together Again", have developed into a limited edition of 20. The initial fundraising events generated $1845 for the Orca Network, and included bidding on #2 in the edition, and raffle tickets sold for #3. 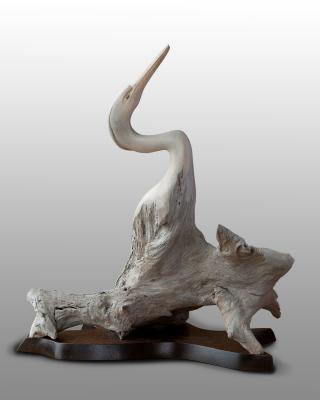