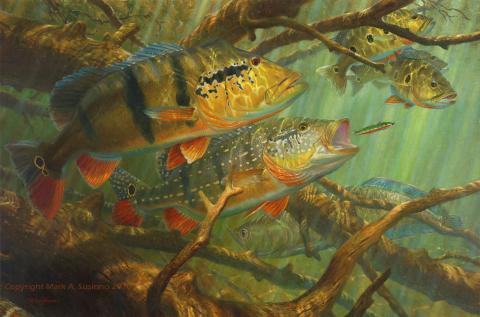 From an interview by David Motes of Riseforms Magazine in November 2011:

I assume from your bio and answers here that you are working full-time as an artist.  True?

Early on I could have been called a stamp artist.  I put more time into painting for stamp competitions than for any other purpose. Duck stamp contests were quite lucrative—especially the Federal ones. They were a great opportunity to garner publicity for an unknown artist.  For me they were invaluable, but few fishing stamp contests yielded much financially.

There are very few fishing stamp competitions left these days.  Stamps I have designed over the last ten years or so have mostly been by request of the publisher handling the state program. Most states have moved to electronic licensing so they have done away with producing a physical stamp.

Does conversion to a stamp compromise the quality of the work?

The accuracy with which my stamp designs have been reproduced as stamps has varied considerably, from looking even better than the original painting to barely resembling the original. Among the better reproductions have been the 1993 Oregon Wild Trout Stamp and the 1991 Pennsylvania Trout/Salmon Stamp.

Is the level of realism or abstraction in your work a response to the audience, or is it your personal standard?

My work has become less detailed and finicky over the 25 years I've been at it. Still, for some I’m sure my work is still too "realistic."

When I was younger I strove to make my paintings stand up to close scrutiny.  I would apply paint over most of the surface with a Number 2 Round—a brush slightly larger than the exposed lead point of a sharpened pencil. I came to see that my work suffered when viewed from across the room, so I began to paint to convey more of a sense of 3-dimensionality from a distance.

My paintings no longer hold up when viewed from inches away, but they look realistic from 10 to 20 feet--which is how they are most often going to be seen.  When they are reduced in size for publication or on the internet, they seem extremely tight.

The degree of realism in my work is influenced both by the marketplace and by my own choice.  I admire artists who paint more loosely than I, such as Mike Stidham, and more tightly, such as Al Agnew. I suppose I have settled into a comfortable zone in between.

The “Beaverpond Greenback Cutt” looks real under the skin.  Some artists seem to stop at color, maybe texture; yours go deeper, to muscle and nerve. I think they convey additional density and vitality.  How do you achieve this?

The greatest advantage I have as a game fish painter is that I regularly handle my subjects in the wild (if I can catch them.) I can study lots of them, alive, fresh from the water.  Though I practice catch-&-release, I certainly have filleted a few fish over the years.  That regular access to the physical anatomy of live fish is hard to match for terrestrial wildlife artists, unless they kill their quarry.

Most of your paintings include man-made things as part of the story, but your perspective doesn’t seem to be “locked in” as angler or as observer.

Some fish painters are divers, so their paintings reflect that underwater perspective. I am a fisherman first.  Most of my paintings arise out of a process akin to what goes on in my mind when I imagine what’s happening under the surface as I retrieve my lure or fly.  I tend to focus on those moments immediately before, when, or after a fish commits to the lure. Occasionally I depict a refusal, but not nearly as often as I see real refusals.

Do you try to refine your presentation of the fish more and more closely to reality, or are you aiming for some other standard?

I have come to enjoy trying to portray the dappling of light through the rippled surface of the water. More and more this prevents me from rendering the colors of a fish precisely. At the same time I have been trying to refine the anatomy--the physical structure--of the fish in my paintings.

There are definitely fish I'd like to paint better, but I cannot think of a fish I will not paint on principle.

Can you describe some of the challenges and advantages to working exclusively in underwater views?

The greatest advantage to painting underwater scenes is that so few artists do it--there's much less competition. This is followed closely by the requirement that I have to go fishing to gather reference material.

“Honey, I need to go gather reference material.”  I think I’ll try that one next time.

It’s copyrighted.  Get your own.  Actually, my wife is more likely to say "Can I come too?"

One very real challenge to painting underwater views is the disparity between what a fish looks like out of the water-- on its side on a stream bank or boat deck--and underwater. The underwater effects of counter-shading can render a fish nearly unrecognizable to the fisherman who is most familiar with how it looks out of the water. My approach has become a compromise between two goals:  the reproduction of an underwater view, and the realization of the mental image the angler carries with him.

'countershading'—can you develop that idea a bit?

Actually what I should say is the neutralization of countershading that happens in shallow water...most fish exhibit some degree of countershading--the back is dark and non-reflective, the sides are lighter and often highly reflective, and the belly is white and not very reflective. Such a color scheme allows a fish to blend into the background when viewed from above, the side, or below. Light from above brightens the normally dark dorsal area; the color of the background is reflected in the sides; and the shadow created along the belly is mitigated by the pale belly color, rendering nearly the same value (degree of light or dark) from top to bottom when viewed from the side. Add in the ripples of concentrated light created by the sun shining through broken water, and the fish can look completely different from its appearance when being held by the fisherman who caught him, where it looks once again to have a dark back, lighter sides, and a white belly.

I’ve watched your work travel from the eastern smallmouth and trout rivers, to western trout, to saltwater flats and blue water, even to the Amazon’s Peacock bass.  What comes first—catching or painting?

It is always easier to depict a fish I have caught. But now I’m occasionally commissioned to paint fish I haven’t caught, or haven’t seen, such as peacock bass. In that case I rely on photographs supplied by the client, backed up by visits to aquariums and reference material. But I can tell you that proper fieldwork on peacocks is high on my list of priorities. 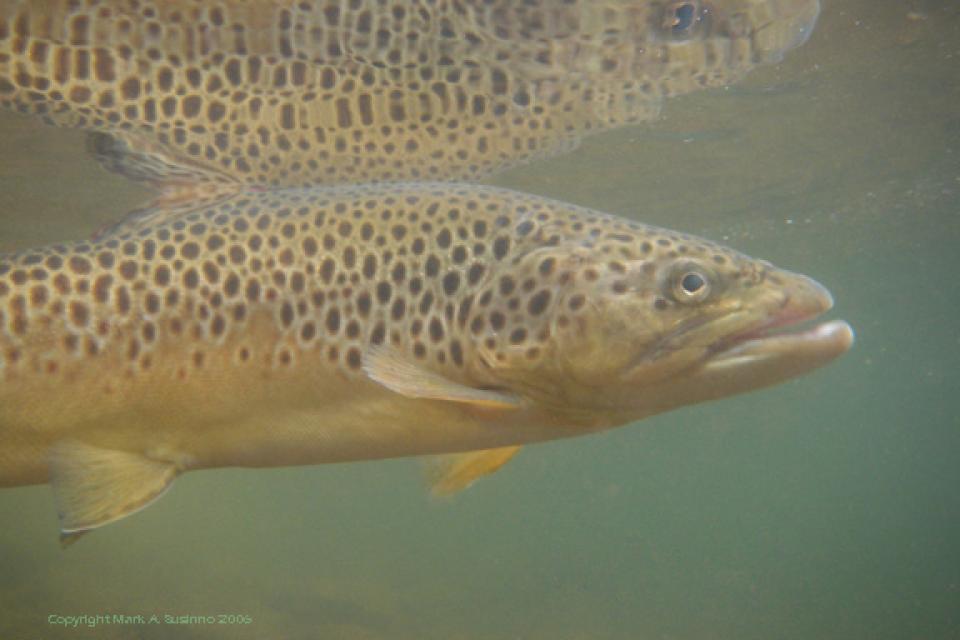 TROUT ABOVE & BELOW WATER (2 Images) 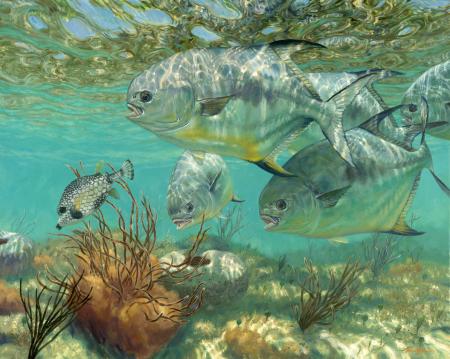