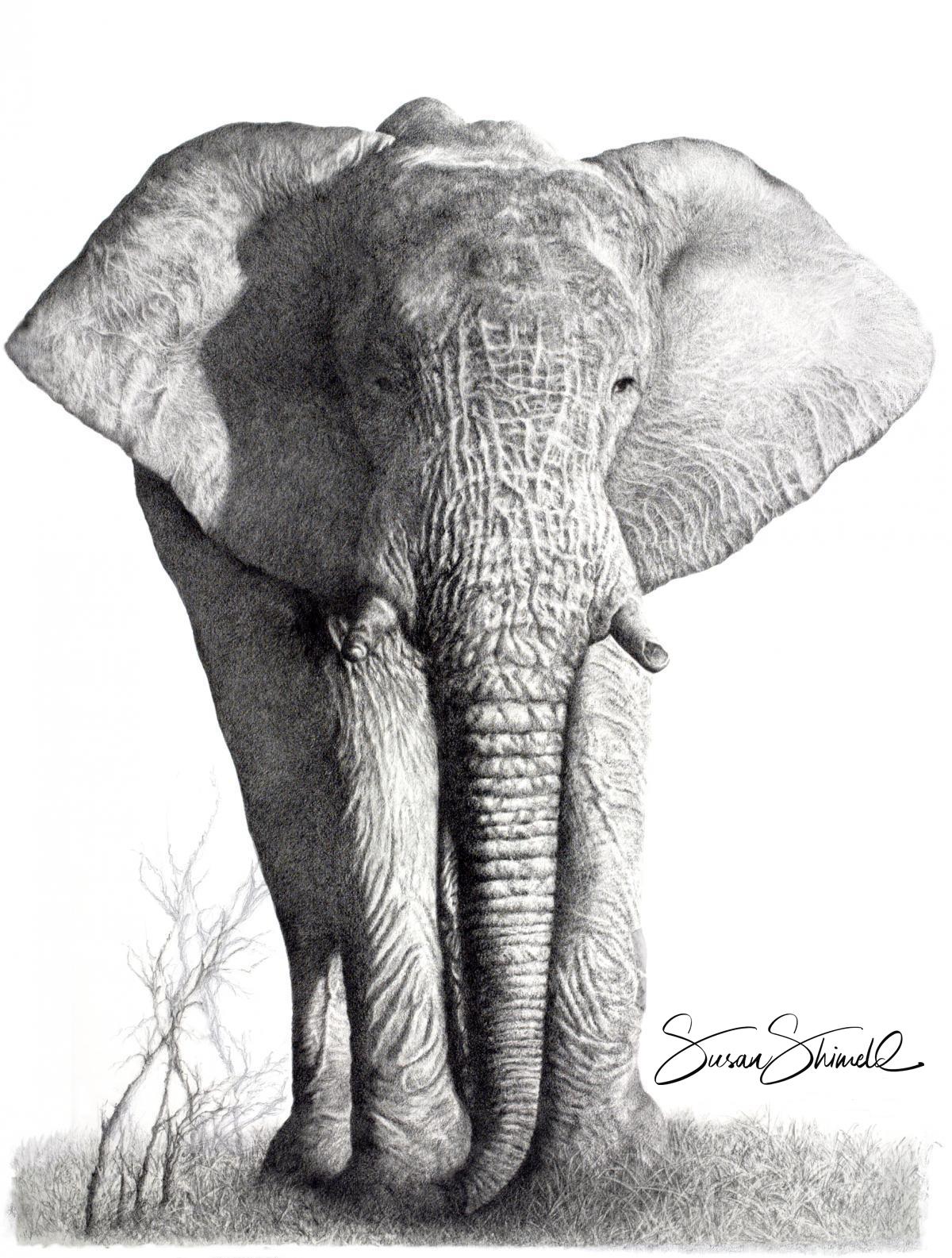 Elephants are one of my most favourite mammals. Gentle, strong, intelligent and tactile are just a few of the words to describe this beautiful African gentle giant.

The elephant is inextricably linked with his surroundings and the survival of so many other species. As elephants migrate in search of food and water they alter the landscape to suit their needs, sometimes in quite a seemingly destructive manner. Large elephants will topple trees with ease in order to make it easier to access the fruits, leaves or seed pods; making this food more accessible for many herbivorous animals, such as impala, gerenuk and black rhinoceros.

Elephants also have strong family bonds and demonstrate their tenderness and gentleness in the ways in which they care for one another, especially the young. An elephant's need for physical contact is very strong and it uses its trunk to satisfy this tactile need.

My pencil portrait of an elephant was portrayed from a photograph taken in Etosha National Park, Namibia by Andrew Watts. The elephant was in a long distance shot among other animals.  I chose to portray my 'Gentle Giant' in pencil, black and white, and at close quarters, in order to convey his size and power.

My first contact with an elephant was whilst working for Friends of the Earth in the late 70's. I was involved in a survey on captive animals and during that period a well-known circus 'came to town'. I knew I was going to have to visit, and walked around the cages and enclosures that imprisoned the long suffering inhabitants. As I stepped around the back of the marquees it was strangely silent. Chained to the dusty ground and quite restricted, I had found them, the elephants.

I will never forget the feeling that swept over me - sheer sadness and emptiness enveloped me as I looked up into the eyes of my very first elephant. As we looked at each other time seemed to stand still. Probably only seconds passed but I was transfixed and I remember hoping with all my heart that she would know I was a friend. As I walked away, I wondered what sort of friend though. I felt absolutely helpless and also felt I was betraying her; as I was leaving her there.

I feel very strongly that nothing is learned from seeing an animal in a concrete enclosure, or behind glass or bars, or from watching wild animals perform 'cruelty-induced' tricks, for our entertainment. I still support the campaign for a change in the law regarding animals in captivity. Elephants are magnificent and gentle creatures and we can learn a lot from them.