Light, color and precise detail are the main elements Saenz uses to capture the grace, power and wildlife mystery. His inspiration and references are vivid experiences walking and enjoying mountain, desert, forest, jungle and all diverse territory of Mexico.

When we ask Eleazar Saenz about his beginning in wildlife art, he remembers with nostalgia the time when he looked at the calendars especially those that depicted images of animals in their habitat. Also he remembers the places that he knew as a child: rivers, mountains, and lakes. The feeling of peace and freedom produced when watching the migratory ducks crossing the sky, and the excitement when he sees an animal in his natural environment. Yes, first he learned to love nature.

Later, Saenz found his life vocation: painting. He then combined his love for nature with art. Now he is a wildlife artist who captures in his images a piece of wildlife and shares it with the viewer. He is wellknown for his versatility and wide range of subjects and mediums including, wildlife paintings, murals, dioramas and portraits.

Eleazar has received numerous awards and been featured in a number of events including:

His work won other prizes and has been exhibited in galleries and museums of Mexico, the USA and Canada. 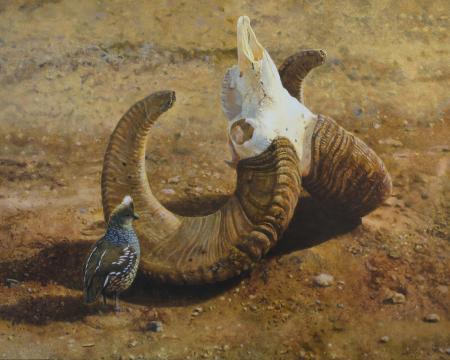