Years before she cast her signature animal forms into bronze, Rosetta had been honing the “stylized realism” that characterizes her work. A former graphic designer, she says, “I got used to crafting things like trademarks that have animals you simplify to the barest essence of line and shape.”  While she has since abandoned two-dimensional renderings (“I even do my ‘sketch’ in clay,” she says), that same “bare essence” has carried into the wild animals that she sculpts, each figure frozen in motion, captured first in clay. In fact, she says it is those precisely crisp lines and minimal detail that imbues her subjects with such potent life force. Whether hunting, running, leaping or pivoting, each figure is reduced to the lines that will direct the viewer’s eye, imparting a fluidity that refutes the rigidity of the metal in which it is cast.

Among Rosetta’s newest works is Ancient Truth, one of her two sculptures that won an award at the most recent Big Horn Rendezvous. Photo: Mel Schockner

Sculpting a feeling for their presence

Rosetta’s collection titled African Cats divulge her particular passion for predatory felines. Meanwhile, other works celebrate the predators of the American West, among them falcons, wolves, bears, and—in the case of Salt Lake City’s Stream of Life—a panoply of the state’s native inhabitants. Yet far from their capacity for ferocity, Rosetta says, it is an animal’s inherent blamelessness that is at the heart of her inspiration. “I don’t make my animals fierce and threatening—because they are not,” she explains. “Predators are just doing what they are designed to do. I find that incredibly innocent.”

A frequent visitor to parks in Africa, Rosetta has seen her share of wild animals in person—and in motion. In fact, it is her visual memory that she depends upon when reproducing them back in her Colorado studio. “When you’re looking at animals, you don’t have time to work with the technology,” she says of her reluctance to carry a camera. “I didn’t want to experience these animals through that lens.”

On one trip, she remembers, a lion walked straight toward their car—close enough, she says, “that I could see how his paw flexed inward as he walked.” The image returned to her months later as she sat shaping the animal into clay. “I didn’t make a note of it then, but visually you remember. Just being with the animals and getting a feel for their presence is so helpful.”

Garnering awards from the National Sculpture Society,  the Society of Animal Artists, and Artists for Conservation,  among others, the animals Rosetta reveres now populate public and private spaces around the world. Oftentimes, she says, animals have been commissioned or “adopted” by corporations, organizations, and individuals who feel an affinity with the qualities they express. Two pieces, for example—Reach for the Sky and The Leap—now reside outside schools attracted to the works’ sense of ambition and possibility.  Running Cheetah, an icon for a multinational corporation, was first gifted by colleagues to the company’s CEO. Realizing the figure exemplified their company’s values of “absolute responsiveness,” he has since commissioned several large-scale versions to stand as sentinels at the entrance to each new headquarter. (It helps, Rosetta says, that the style of her sculptures—at once realistic and interpretive—pair easily with both classic and modern architecture.)

“I try to show in the cubs’ the reaction to mom and there’s a real affection there. They are very good and attentive mothers but they take very seriously their job which is to feed and protect them, neither of which is easy and fails quite often. There are wonderful scenes of affection, mother’s licking cubs, playing with cubs, etc. but that’s not what I am bringing out in them. I want to show that this mother really has a job here. And she is totally dedicated to protecting and nurturing and feeding her cubs. That fierceness is a manifestation of her affection.” Photo courtesy of Chapman University.

Perhaps there is no better example of an organization sharing the sculptor’s love for an animal than that of Chapman University, where the artist’s panthers (the school’s mascot) have become a source of great pride. Every few years, another of Rosetta’s figures seems to take up residence throughout the campus. Charging Panther is rolled out onto the football field for players to stroke for good luck. Two others, Panther and The Leap, guard the field’s entrances. Panther Alertsurveys the campus’ central plaza below. (“I love that aspect of the cats,” Rosetta says. “They will be very patient and look and watch and wait.”)

The university’s latest request, a “mother and child” monument, greets residents in the campus’s newest dormitory. Comprised of a cub looking lovingly up at its mother, Rosetta says Panther’s Pridewas a particularly inspired request. “When you go to college you are away from home—your mother, your family, the feeling of being protected and nurtured,” she says. “I wanted students to feel their new college family would fill such a role and teach them how to survive on their own.”

In fact, Rosetta says, when a client embraces the entirety of an animal she feels the greatest reward.  “With Chapman University, I liked that they don’t just want a growling cat saying, ‘We’re mean!’ Instead, they are using it to express a lot of different qualities depending on where it is on campus.” For clients in Michigan looking to memorialize a local philanthropist, it was the woman’s love of cheetahs that led them to Rosetta. Today three 9.5-foot bronze cheetahs lunge mid-run in her honor. “They called it Cheetahs on the Run due to their endangered status,” Rosetta says. “I thought it was beautiful.”

Eager to inspire in viewers to cherish each animal as she does, Rosetta’s stylized interpretations of their forms are what allow her to emphasize their grace and power.  In the end, her sculpted animals impart a life force of their own, lending all of us a sense of their presence. 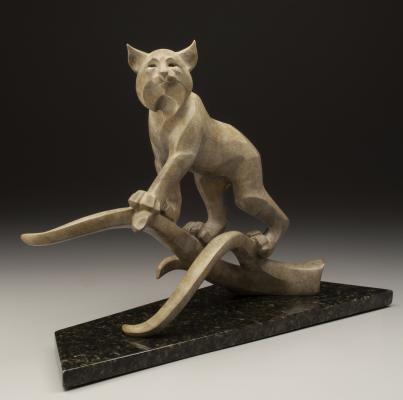