Wildlife with an emphasis on birds of prey and waterfowl

There are two criteria for a painting that Anne Peyton places in each of her finished pieces: One is that the final image shows respect for the subject; the second is that viewers can learn something after studying the art. They are two principles that the artist has carried over to her new career as a wildlife artist, concentrating on birds and avian art.

For 20 years, Anne was one of the most sought after motorsports artists. Today, she has turned her eye and hand to the natural world. “In a way, it’s closing a circle. Birds and other wildlife were the subjects of my earliest paintings. My grandfather had a number of feeders at his Fort Collins (Colorado) home and he was very proud of the birds that visited his yard. I would spend several hours at the table sketching and painting the birds I saw.

“Painting birds may seem to be on the opposite end of the spectrum, but in truth there is a lot of similarity. Birds can be brilliantly colored or purposefully drab. They are technically difficult. The artist must be able to capture and represent the proper attitude of a bird in its natural setting.”

An avid birder, Anne has spent countless hours viewing birds around Arizona and the Southwest. “Observing birds and their habits is a way to discover more about their nature – the motions a Sandhill Crane makes during preening, the way a Golden Eagle walks along the ground instead of hopping or taking a short flight, or the frantic scolding of a House Wren guarding its nest hole. Each of these actions means something for the bird and it is these actions and their meanings that I want to convey to the viewer.”

Anne dedicates several hours each month to volunteering at Liberty Wildlife, a Scottsdale-based rehabilitation and education organization that treats injured animals. Rarely, a bird cannot be released back into the wild. Zoos claim some while others become avian ambassadors for their species at Liberty’s presentations. Anne’s specialty is assisting hawks and owls to become accustomed to people in educational and group settings.

“Each bird is an individual and behaves differently. Even among the same species, each bird has a distinct personality. That surprised me when I first started working with these amazing creatures, but it is an aspect that has served me well in the field and in my artwork.”

Anne's work with Liberty Wildlife was featured in Wildlife Art magazine. She spends at least 20 hours each week working with Liberty's education raptors – birds of prey that have been through Liberty's rehabilitation program but are deemed nonreleasable for a variety of reasons. Her responsibilities include training the birds to be comfortable on both the handler's glove and in front of an audience, daily care of each bird, and working with other education team members so they can become proficient with handling the birds.

She is also one of Liberty's six eagle handlers, working with the organization's Bald Eagles and Golden Eagles each week and presenting these magnificent animals to the public. Anne makes more than 50 appearances on behalf of Liberty Wildlife each year.

Anne is committed to Liberty's mission of nurturing the nature of Arizona by providing quality wildlife rehabilitation, environmental education, research and conservation services. As a wildlife artist, she makes donations from sales of selected art pieces to support education training projects.

"Volunteering at Liberty is probably the most important and most gratifying work I have done," she says. "As more people move to Arizona, we're providing them with an opportunity to see these magnificent birds up close. Hopefully they or their children will make a connection with the birds and become aware of how the changing landscape is affecting those we share the land with."

It's also important that Anne knows more about her subjects so she can paint them while informing viewers about the wildlife and the place they occupy in the environment. She is active with Phoenix-area Audubon groups, participating in five recent Christmas bird counts as well as the International Migratory Bird Day count in May to help monitor the status of local species throughout the year.

She has used the knowledge she has gained to reach out to many local citizens, including guiding students, adults and tribal council leaders of the Gila River Indian Community on a December census of their reservation, teaching the young adults about the birds that live with the community and listening to the stories and songs of their elders.

In 2012, Anne was able to impart her knowledge to a new audience. As the Elizabeth Rubendall Artist-in-Residence at the Great Plains Art Museum in Lincoln, Neb., Anne spoke to more than 600 visitors including several groups of students from around the state. During this time she was able to teach about her art style, natural history of the birds she was painting, and conservation of the songbirds, waterfowl and raptors in the area including the dangers of lead poisoning and lead alternatives for hunting and fishing.

Anne and her husband have also instituted field trips with the Southeastern Arizona Bird Observatory in Bisbee, Arizona, by taking Liberty Education team members to see many of the bird species they work with interacting in the wild.

"The saying is 'a bird in the hand is worth two in the bush' but we've found that our education team can share more experiences with our audiences and be more passionate about our birds by watching the birds in the bush," Anne says.

"Wildlife conservation depends on educating the public. People will only care for wildlife once they have an emotional connection to it. Looking into the eyes of owls and eagles makes a powerful connection." 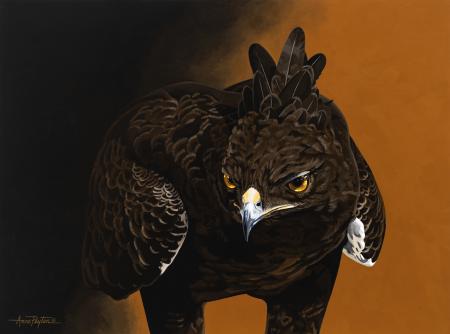