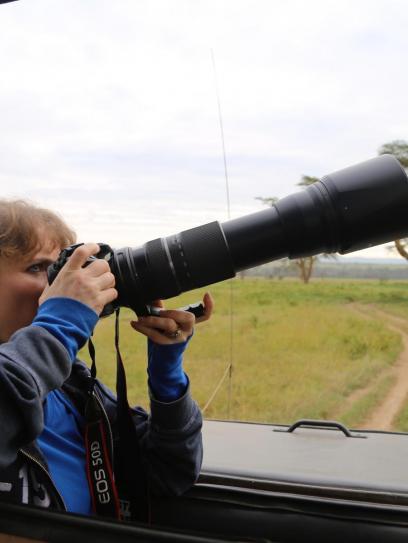 Michelle McCune was born with a passion for natural places and wildlife.

In 1994, while completing her veterinary degree, she traveled to Namibia with the Cheetah Conservation Fund. Here she learned about the benefits of a well rounded conservation program and her passion for Africa was ignited. She and her husband travelled to Zimbabwe in 1998 and she then visited Kenya in 2008 on an artist's safari with John Banovich. She also visited South Africa in 2012 and again with her family in 2014. She and her family have also traveled to Costa Rica numerous times.

In 2017 she and her family relocated from the Chicago area to the Santa Cruz Mountains in California. With this move came a transition away from private veterinary practice into helping with conservation and research. Michelle now helps the Marine Mammal Stranding Team with necropsies (autopsies) on deceased animals to try to determine the cause of death as well as supporting research on both the animals and hte health of the ocean. She also helps field researchers from the UC - Santa Cruz who are studying northern elephant seals and ways the seals can help us keep abrest of changes in the ocean. Michelle also serves as a docent at Ano Nuevo State Park where she leads tours of the northern elephant seal rookery during the breeding season and educated people on the animals, their conservation history, and about the Marine Protected areas and other species found in the Monterey Bay area. This new found love of the coast and learning more and more about the species that call it home have given her added inspiration for subjects in her ork, both painting and some sculpting.

Michelle began painting in 2001. Utilizing photo references from her trips to Namibia and Zimbabwe as inspiration, a wildlife painter was born. In order to expand her personal abilities, she attends workshops whenver possible. She has studied with Terry Isaac and Susan Labouri, John Banovich, John and Suzi Seerey-Lester, Jan Martin McGuire, and Guy Combes, and Greg Beecham. She has been fortunate enough to have studied with some of these fabulous artists multiple times! She has also attended the Susan K Black Foundation workshop numerous times.

Combining the lessons learned at these workshops and her knowledge base, Michelle uses her work to capture a moment of time. Her knowledge of animal anatomy and behavior from her veterinary studies allows her to portray the animal accurately and with emotion. She only paints from her own references in order to instill the passion she felt at that moment into the piece. Her vision is for her artwork to stimulate and inspire others to support conservation efforts.

She was accepted as a Signature Member into the Artists For Conservation in 2007 and is very excited to be part of this incredible group of dedicated and talented artists. She has shown her work in the 2008, 2012, 2014, and 2018 AFC Shows and has received many awards at art shows including Best of Show, Best 2-D artist, People's Choice Awards, and Purchase Awards. Her work has been published in the 2008, 2012, 2014, and 2018 Artists For Conservation exhibition books as well as appearing on the cover of the September 15, 2013 Journal of the American Veterinary Medical Association (JAVMA).

A portion of all sales will benefit conservation groups. Michelle supports the Cheetah Conservation Fund, the Soysambu Conservancy, the African Wildlife Foundation, the Rainforest Alliance, and the Wildlife Conservation Society. As a veterinarian, she routinely treats injured wildlife as a public service. 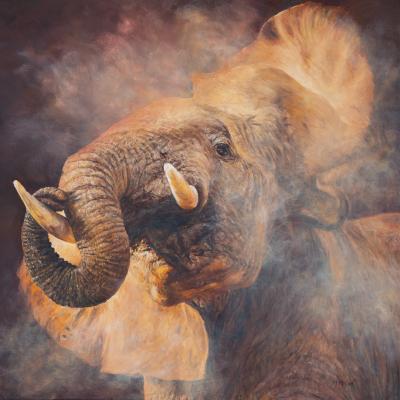