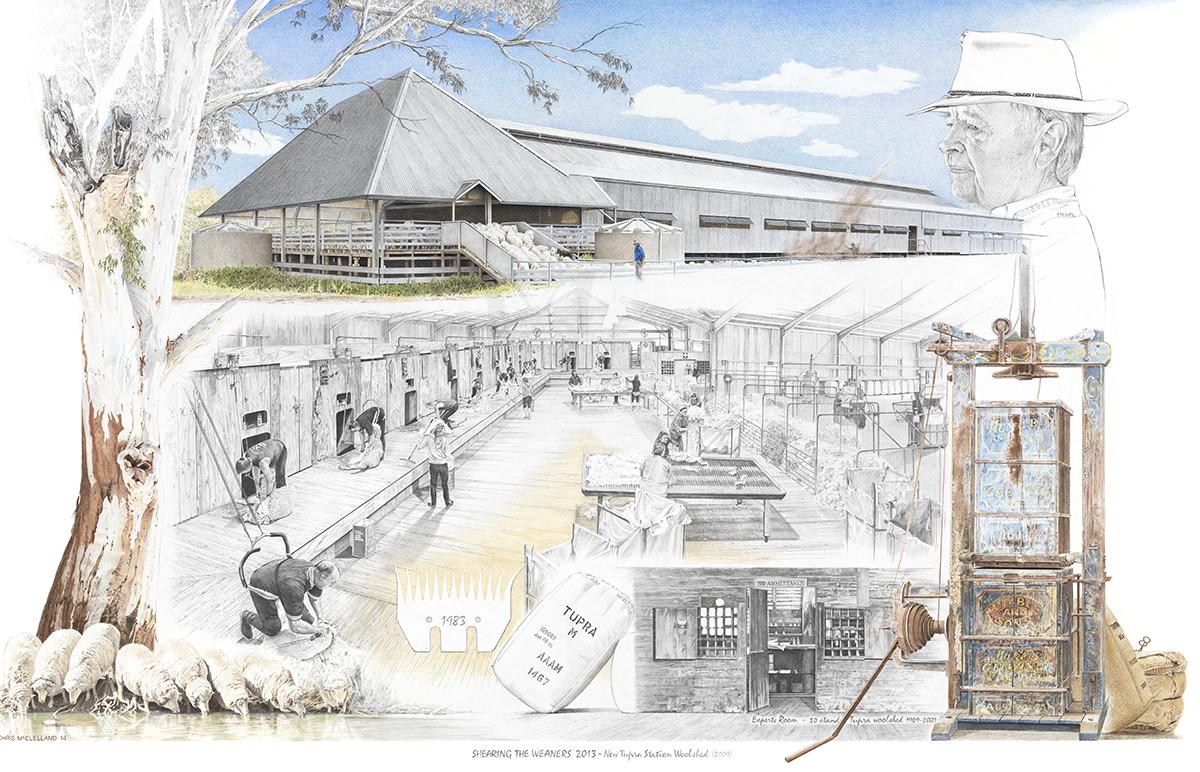 This montage, all graphite and coloured pencil drawing, depicts the recent rise from the ashes of a huge new steel and galvanised iron woolshed. The Australian woolshed is a national symbol of our early past and our dependency then on the wool industry. The original 50 stand shed, which for 98 years was the heart of the property Tupra Station which I managed for 21 years, was struck and demolished by a renegade mini tornado in 2007. This historic old sheepstation near the junction of the Lachlan and Murrumbidgee Rivers was first settled by the famous pastoralist James Tyson. After his death in 1898, the property was purchased from the estate in 1900 by Mr A. T. Creswick who gained the reputation, after Sir Samuel McCaughey, as being the largest individual sheep owner in the history of Australia. In 1980, it was sold by his grandson Sir Alec Creswick to the McLachlan family, prominent pastoralists of South Australia.

After the disastrous act of nature, and under the thoughtful direction of Mr Ian McLachlan, a new and larger, state-of-the-art 11 stand shearing shed was built of similar shape over the site of the old one. Where practical, the original less damaged internal flooring and holding pens were resurrected in places, preserving some semblance of the old shed.

For me and my family, the era of over two decades on the Hay plains is one dear to our hearts and the 422 hours that went into this drawing was more of a labour of love.

In colour is the new woolshed viewed from the banks of the Lachlan River, while below in graphite is the busy state-of-the-art working layout of a shearing shed in action. Looking on is a pencil portrait of the owner Ian McLachlan.

However, nostalgia has included some of the original shed. The Ferrier's wool-press (Serial No. 1604) built in Geelong by Humble and Nicholson, is one of the original wool-presses preserved undamaged from the original shed. Beside it is a jute wool bale and an Indian manufactured steel banded compressed bale of jute woolpacks and caps. Because of fibre contamination, and the advent of hydraulic presses, these were eventually outlawed and replaced by synthetic woolpacks.

The inclusion of the expert’s room in the drawing represents an important part of the original shed and the almost forgotten role of 'the expert' in the larger sheds of the pastoral industry years ago. The expert attended to all shearing machinery and the diesel engine that powered the overhead lines. In his very private domain he was responsible for sharpening the 50 shearers’ combs and cutters when placed in tin boxes of their allocated numbered pigeon holes.

The outline of the 13 tooth wide comb carries over from the original shed. It represents and is a reminder of our eventual victory in the old shed over the shearers’ wide comb dispute and strike in 1983.  The thuggery and inflexibility of the Australian Workers Union led to a ban on all shearing because of, in their terms, the unacceptable use of wide combs in the industry by 'scab' shearers. At the time Mr Ian McLachlan was president of the National Farmers Federation and being a strong and no nonsense leader, took on the AWU by showing the flag and employing a team of wide comb shearers in the old Tupra woolshed to become one of many sheds that eventually broke the strike and caused the ultimate downfall of the union in the bush. Arbitration forcefully settled the matter and shearing was soon allowed with wide combs and almost totally accepted by all shearers without a whimper.

The Merino weaners are watering on the Lachlan River, a typical scene amongst the red gums.

During my thirty years of pleasurable service with the McLachlan family, I managed Tupra Station from 1982 to 2003 and we generally shore around 40,000 plus Merino sheep.