Approaching her fifth decade as a fine artist, she has always used her work to raise both money and awareness for endangered animals. She has been continually active in many animal conservation organizations as well as serving on the board of directors for The Project Hope Foundation. The International Sketch for Survival,  the International Rhino Foundation and The Cheetah Conservation Foundation have each named her as a signature artist and designer of their fund raising images. Over the past 40 years, Anne's artwork has raised over $280,000 for conservation projects, programs, and organizations worldwide.

While on one of her annual trips to Africa in 2012 to research her animal subjects, she began bringing art supplies and teaching art and conservation messages to children in Botswana and Zimbabwe. In 2014, she and her oceanographer husband, Jim Hart, formed a nonprofit called," ARTS FOR ANIMALS". What began, simply as their personal effort to teach African children the importance of wildlife to their heritage and their future, has grown into an organization helping thousands of children to learn the value of art and wildlife conservation to their future each year.

Her website, www.artsforanimals.com, has offered wildlife lovers across the planet the opportunity to help children in Africa  and across the globe learn the value of art and creativity as well as the importance of local wildlife to their heritage and their future.

She often organizes and sponsors Art Events which feature a specific animal conservation program and then donates half of the proceeds to the featured program and ARTS FOR ANIMALS. For example, In 2015, she raised $45,000 at an art event for the RUHAHA LION PROJECT and in 2016 she raised $24,000, for PAINTED DOG CONSERVATION. In 2018 and 2019, by involving art students from the ARTS FOR ANIMALS Wildlife Art Conservation Center in Zimbabwe and local Zimbabwe in artists, she helped the Explorers Against Extinction, Sketch for Survival international auction raise over $10,000. Each year she donates several art pieces and a significant portion of her profits to conservation causes across the globe. Anne and her husband, Jim,  donate their time and resources so that 95% of ARTS FOR ANIMALS donations go directly to fulfilling the mission of ARTS FOR ANIMALS.

In 2015 Anne and Jim ,with the help of one of their partner organizations "CHILDREN IN THE WILDERNESS", renovated an old building near Victoria Falls in Zimbabwe and started the ARTS FOR ANIMALS WILDLIFE ARTS CENTER to give local children a place to be exposed to, and learn about, art,conservation stewardship and creativity. For the first time,  children in the area had a place dedicated simply to art and the beauty and importance of their local wildlife.

When visited by the Zimbabwe Minister of Education,he was impressed enough to appoint an art curator/teacher to run the Center and propose other wildlife art centers to be included in the Zimbabwe national school curriculum. The Center was an overwhelming success and a year later, a brand new Center , with room for 40 students,was built with funds Anne raised through Art events and donations from clients.

The new Wildlife Arts Center provides a large classroom and secure computer room for area students. Surrounded by inspirational messages and art donated by Anne and her artist friends, children are often exposed to the magic of art for the first time.They are motivated to exercise their own creativity and understand the value of their wildlife to their own heritage and future. It also provides a place where local and international artists visiting Victoria Falls can come and share their talents with local children. Wildlife artists like David Bjurstrom, teach at the wildlife Center during visits to Zimbabwe .  Other artists and friends like Sarah Garcia ,Tich Ncubez and Sally Maxwell demonstrate different artistic techniques by showing their work on the walls of the Wildlife Arts center.

Recently, a new ,open air gallery was added,doubling the effective size of the Center and creating a place art students can meet, draw and work on projects, even when the Center itself is closed.

ARTS FOR ANIMALS provides drawing kits, activity posters , inspirational art and classroom teaching aids as well as organizing mentoring by teachers,local artists and talented fellow students that have received ARTS FOR ANIMALS scholarships. Since power in the area is scant and unreliable ,electricity supplied by a new solar power system which runs the ART CENTER'S  Laptop computers for the students to use. Arts for Animals also donates laptop computers to local school art programs and Conservationists. Often the computers donated are the first these children have seen.

Anne and Jim ( a published wildlife photographer himself) designed a waterproof poster (many of the homes in this area have mud walls) featuring Jim's wildlife photographs, Anne's artwork and a framed blank space . They use what they learned during ARTSFOR ANIMALS lessons to draw their own wildlife art piece.  Highly valued  by these underprivledged children ,these personal posters spread inspirational conservation messages like," Our wildlife- Protect them now or Lose them forever" ,to their family, friends and neighbors.

The WILDLIFE ARTS CENTER also provides a place for the local" Eco rangers" and "Animal Protector" groups to meet. Developed by Anne's husband Jim, the " Animal Protector" program, encourages African children to make a pledge they will protect animals and help their family and friends understand the value of African wildlife. Each child signs a written contract  pledging to defend their local wildlife against animal poaching. Along with the written contract, each child gets to wear a blue wristband signifying their pledge to protect wildlife. In 2014, 450 children first made that pledge and wear the blue wristband which signifies that commitment. Since then,over 8000 children have made that pledge. Those blue wristbands have become highly coveted since they are now worn by park rangers, anti-poaching police and conservation scientists across Zimbabwe,Zambia, South Africa and Botswana. Our goal is to create an army of wildlife protectors fighting wildlife poaching and protecting wildlife.

Today, ARTS FOR ANIMALS provides support and Art teaching components to partners like "CHILDREN IN THE WILDERNESS" , "TIMBAVATI FOUNDATION " and "PAINTED DOG CONSERVATION" "bush camps". These camps teach conservation stewardship to over 3500 children each year. By helping ongoing programs across Africa to offer kids an opportunity to connect creativity with conservation as a part of their Animal Conservation curriculum ,excitement and motivation is increased and their programs are more effective. Our partners help thousands of children each year to become" Wildlife Protectors" and actively help fight wildlife poaching and snaring in their own villages.  Our partnerships grow each year, enabling ARTS FOR ANIMALS to continue to influence more and more children each year with a minimal, but highly effective, financial investment.
Anne travels back to Africa several times each year to personally teach and inspire children at the WILDLIFE ARTS CENTER and also at local schools in Zimbabwe.
Anne's goal is to have thousands of African children growing up with a firm understanding and commitment to preserving their wildlife. If we are going to change the future, it is going to be by changing the attitudes and efforts of children today. 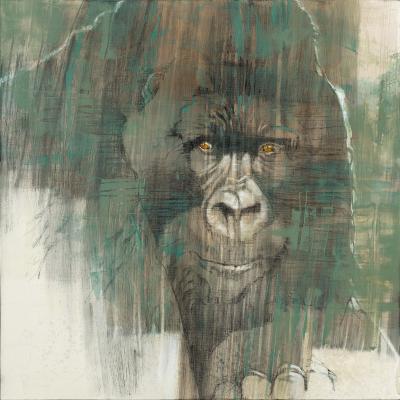