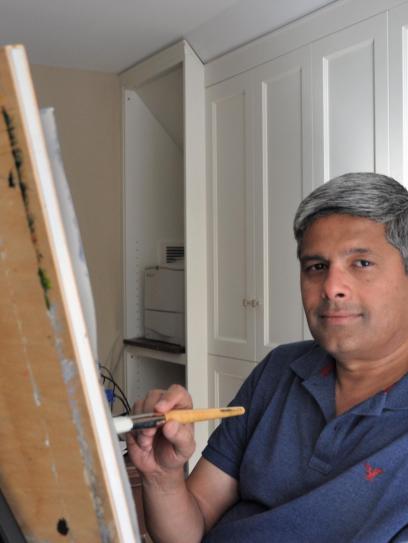 Consumed by insatiable wanderlust and a deep-rooted passion for exploring exotic cultures, I’ve lived in or visited over 75 countries around the world. I am also the author of an Art/Travel book, Rambles into Sacred Realms: Journeys in Pen and Paint, which depicts my stories of twelve places of peace and power around the world retold through my own artwork and prose. I  have published nearly 1000 articles on travel, humor, and culture in various newspapers all over the world, and have won a Best Travel Writer of the Year award.

As a global citizen I’ve often found myself in strange situations, once being suspected of kidnapping my own son across the Israel-Jordan border, and on another occasion being grilled by a suspicious Sri Lankan immigration officer who wondered why someone of Indian ethnicity living in Thailand working for a U.S. company engaged in a project in Israel and South Africa would travel to Colombo on business. (You had to be there...)

As a much-exhibited artist I focus on fauna, flora, landscapes and ancient monuments, capturing their essence using a variety of techniques including scratchboards, watercolors, pastels, charcoal, oils and acrylic mediums. Over the past 30 years, I’ve participated in several group and solo exhibitions of my art works in the U.S. and across the world and have won several art awards. As a member of a number of prestigious artists’ organizations, including the International Society of Scratchboard Artists and Artists for Conservation, I regularly exhibit my work in various juried and non-juried shows organized by local art guilds in the Chicagoland area and other U.S. cities.

When I’m not holding a pen, brush, or an airplane ticket, I head up my own global company which has me frequently shifting gears between Thai, Hindi, Thinglish, Hinglish and English. I’m an alumnus of the Harvard Business School, and live near the exhilarating beauty of Lake Michigan in Wilmette, Illinois with my wife, and also my son and college-going daughter, who have figured out a way to spend more with their parents than the average empty-nester would get to!

Nature holds a dear place in my heart - especially pristine places of power like mighty Denali or the sacred fire pit of Halema'uma'u in Hawaii where the vast expanse of Mother Nature completely takes over. Throughout my travels I have immersed myself in the cultures of each area, trying to comprehend the secrets and legends of each locale.

Places of natural power and divinity have always fascinated me - kindling in me a powerful inspiration that finds expression through my artwork and writings.

Through pen and paint I seek to portray the emotional essence of such places. As a much-exhibited artist I focus on landscapes and wildlife, capturing their essence using a variety of techniques including scratchboards, watercolors, and acrylic mediums. I am also an award-winning writer whose articles on travel have been published by leading newspapers internationally.
I am also the author of an Art/Travel book, Rambles into Sacred Realms: Journeys in Pen and Paint, which depicts my stories of twelve places of peace and power around the world retold through my own artwork and prose.

My hope is to always inspire my audience, kindle awareness of Mother Nature’s gifts, and take them with me to these enchanting destinations. I want them to vicariously enjoy my travels to these incredible places through the perspective of my words and images.

And who knows? Maybe, if they’re not already doing so, they too will look to capture their experiences through drawing, painting, writing, photography, poetry, or other forms of artistic expression.