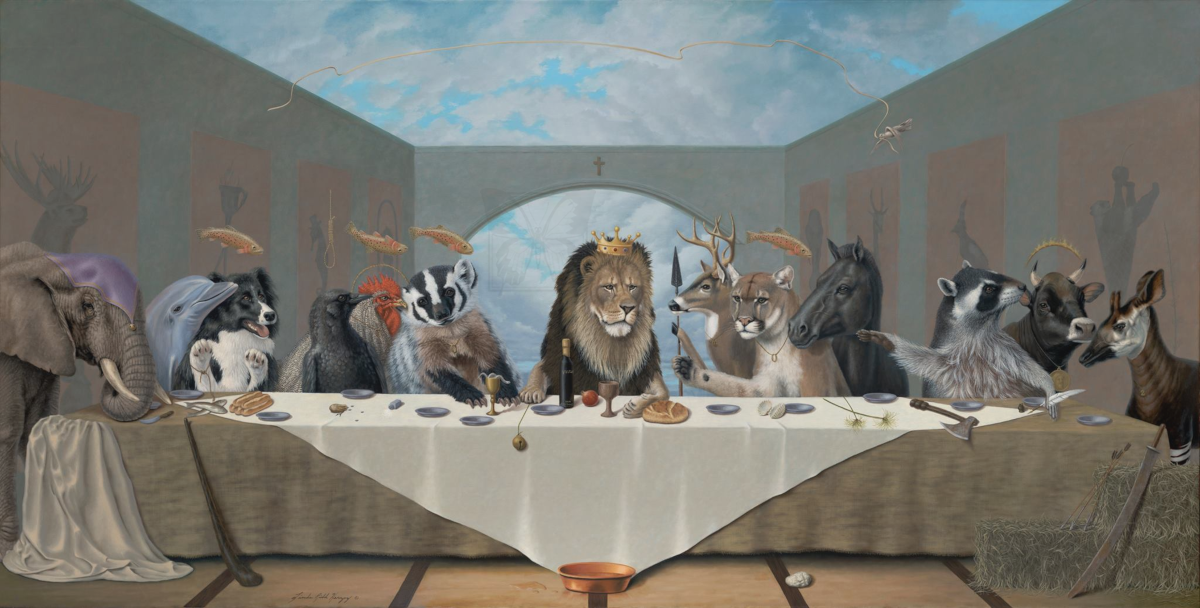 I spent 3 months in the evening researching which animal would best symbolize the charactor of each apostle. After that, it took me 6 months to paint. I also added in here how each of them died. Here are very some limited notes I made of each.

Cheerful and devoted. Not much known of him. Flayed alive with a carving knife. Only disciple with royal blood. The color purple and elephants symbolizes royalty = Elephant

Not much known, mentioned only three times in the Bible. James the Just - virtue. Stoned then killed by a fullers club to head then sawed him in half. A dolphin symbolizes virtue = Dolphin

Commercial fisherman. A leader and often gathered people to come to Jesus. Brought the boy with 2 fish and 5 loaves of bread to Jesus to feed the crowd of thousands. Died not nailed but tied on an X shaped cross. Social and a gatherer. = Border Collie

Social and vocal in crowds. Loved money, carried and handled the Apostles money bag. Died hanging himself, from a tree. Crows are very social and vocal, and attracted to shiny objects. = Crow

Commercial fisherman and in the Inner Circle. Bold confident and talkative and was the leader and spokesmen for the apostles. Only married apostle. Died on a cross upside down. The name Peter means made of stone or rock. Denied Christ 3 times before the rooster crows. = Plymouth Rock Rooster

Commercial fisherman and in the Inner Circle. Served poison in a cup it turned into a snake. He was the youngest disciple. The only disciple to die of old age. “Beloved Disciple”, Brother of James the greater. “Sons of thunder” and had a temper, he was ambitious and bold. = Badger

Pomegranate is a symbol of Christs suffering and resurrection. At the supper, Jesus took off his outer robe and washed his disciples feet from a bowl of water. He broke bread to represent his body, poured wine into his glass and had each of the disciples take a sip to remember his blood. Died on the cross. “King of kings”, “King of the Jews”... King of the jungle. = Lion

Little known about Tomas. Referred to be as Jesus twin because they looked alike – Gemini twin symbol. Skeptic, “Doubting Thomas”. Speared to death. He was timid = Deer

Commercial fisherman and in the Inner Circle. Closest apostle to Jesus. Brother to John - “Sons of Thunder”. Scallop shell – symbol of his ministry. Stoned to death. He was courageous and ambitious. = Cougar

Jewish apostle that had a Greek name. After Jesus died preached in Greece. Died on a cross then wrapped in papyrus. Philip in Greek means lover of horses. = Andravida Greek horse

Fire halo represents when at the Pentecost he received the Holy Spirit and became “tongue of fire”. After Jesus died, he wore a picture of Jesus on a necklace. Killed by arrows. Little know of him but a man of positive force and virtue. = Bull

Was a Zealot which was a member of Jewish movement against Romans. A debater. Crucified up side down then sawed in half at death. Very little known of Simon. = Okapi