"If you work to raise awareness and save a species, you will, in turn save an ecosystem as well. "

Harvill is actively involved with the conservation efforts in her home in southern Brazil. Such organizations include SPVS (Society for Wildlife Research and Environmental Education) where she is active in the Red-tailed parrot project, having participated in several years' census counts, donating her artwork for t-shirts, and having illustrated "Vida Livre" a 48-page children's picture book in cut-paper collage and watercolor. Written by Brazilian author Adélia Woellner, the book details the life of the endangered Red-tailed parrot and the efforts of SPVS to save this species. The book was accepted by the Brazilian Ministry of Culture and was sponsored by EcoVia. The official launch was June 4, 2012. Of the 3,000 books printed, 1,500 were distributed free of charge to school children along the southern coast of Brazil to raise awareness about this parrot and its habitat. Visit www.spvs.org.br.

In 2012, "WISDOM, the Midway Albatross" was also released. Written by Darcy Pattison and illustrated by Harvill, this children's book details the life of the world's oldest wild banded bird - WISDOM, an endangered Laysan Albatross. Of the 22 species of albatrosses, 19 are endangered. WISDOM's survival of the 2011 tsunami and other natural and man-made disasters are chronicled, including the deadly practice of longline fishing and the death of thousands of albatross chicks each year due to plastic pollution in our oceans. The book won first place in the Writer's Digest Annual Self-Published Awards in the children's book category and received a starred review by Publishers Weekly. It was named a Finalist in the Children’s/Juvenile Non-Fiction category of the 2013 Next Generation Indie Book Awards and is available in the Smithsonian Museum stores. It was nominated for the Sakura Medal for 2015, this book award is voted on by children from international schools in Japan. It even made its way to the halls of the U.S. Congress in support of a Bill to protect sea birds from longline fishing at the request of the Audubon Society.

Harvill has been commissioned by the Brazilian Ministry of the Environment - ICMBio, to create the cover paintings for their National Action Plans for the Conservation of Endangered Species. She has completed 12 covers to date, one of which is the Spix's Macaw, considered Extinct in the Wild, with only approximately 85 birds existing in captivity. Harvill's cover painting is for the international version of the National Action Plan for the Conservation of Endangered Species, which includes a re-introduction program for this macaw.

She is also active in the project "Ararinha na Natureza" of SAVE Brasil (the Brazilian affiliate of Bird Life International) that is working for the re-introduction of the Spix's Macaw or Ararinha Azul. She was invited to lead workshops in São Paulo at the Avistar Bird Conference in May of 2013 and again in October 2013 in Curacá, Bahia, the former home of the Spix's Macaw. She was a guest speaker at the opening ceremonies and led 2 days of workshops for approximately 300 children from the area.

In 2014, she created and donated artwork of 10 bird species in initiatives of SAVE Brasil/Bird Life Intern'l. to reduce trafficking of wild birds through their ClickAves and Plano de Voo (Flight Plan) programs.

In May of 2013, she donated a giclée print of her Maned Wolf painting, "Lonely Lobo", to be raffled by World Land Trust-US (now Rainforest Trust). The proceeds from the sale of the print went to buy 28 acres for Maned Wolf habitat in Bolivia.

In 2014, she has teamed up with Rainforest Trust again to support their initiative to help the Serra Bonita Reserve in Bahia by photographing and creating a portrait of a Northern Brown Howler Monkey couple, a critically endangered species. https://www.rainforesttrust.org/news/2014/serra-bonita-q-wildlife-artist...

Also, in March of 2014, her children's picture book, "ABAYOMI, the Brazilian Puma" written by Darcy Pattison was released. The team of Pattison and Harvill that created "WISDOM, the Midway Albatross" now brings you the story of an orphaned puma cub, struggling for survival in a fragmented forest world and the scientists that are helping him to be able to return to the wild. In 2015, the Brazilian version of the book "ABAYOMI, um Encontro Feliz", a project of the Brazilian Ministry of Culture and sponsored by FMC Corporation was released with the goal of distributing all 3,000 copies free of charge in the 17 municipalities where the pumas live. Current, these municipalities are running an " ABAYOMI in the Schools" program.

Harvill and her husband, naturalist Christoph Hrdina are partners with several prominent biologists in the private reserve - Reserva Bicudinho-do-brejo in the state of Paraná in southern Brazil. To date, 269 bird species, 11 of which are endangered have been listed on this reserve which is 30 hectares in size or approximately 90 acres. Harvill will be creating a children's book of the endangered Bicudinho-do-Brejo, a resident of the reserve. The 48-page picture book has already received the authorization of the Brazilian Ministry of Culture.

In January 2016, Harvill and her husband also founded a Facebook group - ABUN - Artists & Biologists Unite for Nature, with more than 400 members, the group creates artwork voluntarily and Banners of that artwork are then designed for biologists around the world working with endangered species to support their educational and marketing efforts. As of June 2017, the group has completed 12 projects. Visit :  www.facebook.com/groups/ABUN4Nature

She was named a "Madrinha" (godmother) for Mater Natura's campaign: "Parceiros da Biodiversidade", joining a small number of invited artists to celebrate and raise awareness of nature through their arts. Visit www.maternatura.org.br (Environmental Studies Institute). 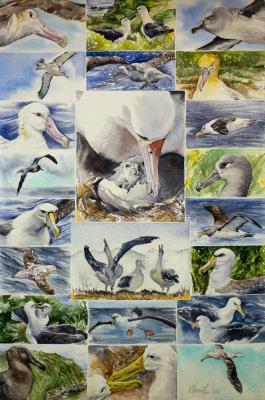