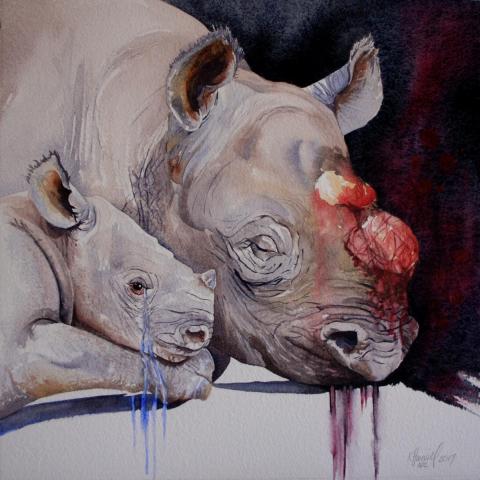 Baby Rhino Rescue has launched their first Annual International Art Contest, and I'm delighted to be a part of it, as a participant and as a judge. Entries close on September 21, just in time to celebrate WORLD RHINO DAY on September 22.

I have been distressed for years over the plight of Rhinos and the unnecessary killing of this amazing and iconic creature purely for human profit and greed. I believe that art is a powerful messenger to change hearts and minds - and I hope the messages in this important Art Campaign will do just that. It's horrifying enough to view the images of adult Rhinos murdered for their horns, but to see the babies, grieving and orphaned is heartbreaking. Rhinos are important - they contribute to the great Web of Life on this planet - of which we are all a part.

According to the Baby Rhino Rescue website - "Three Rhino species, the Sumatran, the Javan and the Black Rhino are critically endangered while the Indian Rhino is listed as threatened. The Sumatran Rhino clings to survival as its numbers plummet faster than those of any other extant species. Over the past 20 years, poachers have killed more than half the world’s population of Sumatran Rhinos making it the most endangered Rhino of all. Only 5 Northern White Rhinos remain with none of them in the wild. According to WWF, demand for rhino horn translates into at least 1,300 Rhino deaths annually, by far the highest in modern history....Over the last 4 decades the Rhino population has declined by 90%."

The site goes on to explain - "As recent studies show, Rhinos are essential in maintaining the ecosystem. Like elephants and wolves, they are keystone species—remove them from the picture and the entire system crumbles. Rhinos are just like the keystone in an arch, the single block that holds all other stones in place.Though they are few in number, even when not hunted, the Rhino is an animal whose importance to the ecosystem is disproportionate."

My entry, featured in this post is titled - "Tears for Mom", a watercolor, 15" x 15"/39cm x 39cm. It was a difficult endeavor for me, not from a technical standpoint but from a "heart" standpoint. But, the image seemed to insist that it needed to be painted - and finally the need for the message overcame my discomfort in producing it.

Certainly, there will be other entries celebrating more positive emotions of this rescue mission. According to founding member, Rene Breier, "....we have to refocus on the orphans who have been saved. The tragedy of the rhino and the orphans left to die is what gave rise to Baby Rhino Rescue. Over a mere 2 years, over 40 orphans have been rescued and supported by the generosity of our donors. The babies in the sanctuaries are happy, at peace, growing and forming little rhino families among themselves. And as they become independent, they are released into a large natural habitat where the hope is that they will breed. We want as many artists as possible to paint for our contest. Through the power of art, we will make our message heard, and felt worldwide. Aside from the blood and the tears, there is much beauty, and much scope for painting incredibly adorable rhino orphans like Zac who plays with his tire , or Twinkle who has her own blog on FB!!!! ENTER the CONTEST!....THANK YOU ALL!"

YES !! Enter the Contest or support those who do - to support my entry of "Tears for Mom" - you can click here to take you directly to the Crowdrise Page to Donate :  https://www.crowdrise.com/adult-free-form-art-entries-and-general-donations/fundraiser/kittyharvill​.