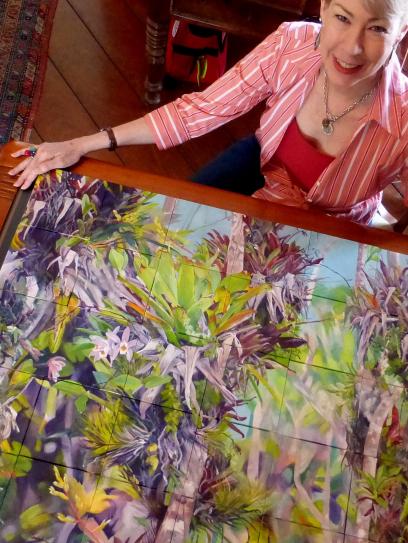 She has illustrated "Bye Bye BIG" for Plum Street Publishers, released in Fall 2017, and also for Plum Street Publishers, "The Wishing Foxes", released in Spring 2017. "Up! Up! Up! It's Apple-Picking Time" was published in Fall 2003, for Holiday House, New York. "Sitting Down To Eat", Fall 1996, for August House LittleFolk, was named an American Bookseller Pick of the Lists and featured in the Dec. 2, 1996 issue of NEWSWEEK. It was also named a notable children's trade book in the field of social studies for 1997 by a joint committee of the National Council for Social Studies and the Children's Book Council. Other books include "Dancing with Little Teddy", Fall 1996, a biography of Dr. Joycelyn Elders, "Jack and the Animals", Fall 1995, August House, LittleFolk, and "Believe in Katie Lynn", also Fall 1995, Eggman Publishers, Nashville, TN. School division work includes "Others Were Here Before", Spring 2000, McGraw Hill School Division, "Adventure at Mitchell Caverns", Spring 2001, also McGraw Hill School Division. She has also done textbook illustration for Houghton Mifflin.

She has donated her illustrations for two wordless picture books for Developing Hearts of Stratford, Connecticut. Her work has appeared in Country America magazine, CATS magazine, on more than twenty book covers for August House Publishers, and she illustrated the 2002 poster for Arkansas Heritage month. Other clients include Scentations, Inc., Federation of American Health Systems, and Arkansas Lawyer magazine.

She was accepted into Aqueous USA 2002, a National juried watercolor exhibit. She illustrated the cover and accompanying booklet for the audio book "The Animals Could Talk", a Parent's Choice Gold Award winner in 1994, published by August House Publishers. Additionally, she received an Award of Excellence for the Southeast Library Association Southern Book Competition for "The Folktale Cat", and the PIAS Award of Excellence for the cover of "Southern Hospitality Cookbook", which were both published by August House Publishers.

Now having dual residency in both the states and Brazil, Harvill divides her time between the two countries, currently specializing in wildlife art and specifically endangered species. She is currently working in acrylic, pastel and oil in addition to her watercolors. See below for her artwork supporting conservation, including the release of 4 children's picture books.

Harvill has been actively involved with the conservation efforts in her home in southern Brazil since 2006. Such organizations include SPVS (Society for Wildlife Research and Environmental Education) where she is active in the Red-tailed parrot project, having participated in several years' census counts, donating her artwork for t-shirts, and having illustrated "Vida Livre" a 48-page children's picture book in cut-paper collage and watercolor. Written by Brazilian author Adélia Woellner, the book details the life of the endangered Red-tailed parrot and the efforts of SPVS to save this species. The book was accepted by the Brazilian Ministry of Culture and was sponsored by EcoVia. The official launch was June 4, 2012. Of the 3,000 books printed, 1,500 were distributed free of charge to school children along the southern coast of Brazil to raise awareness about this parrot and its habitat. Visit www.spvs.org.br.

In 2012, "WISDOM, the Midway Albatross" was also released. Written by Darcy Pattison and illustrated by Harvill, this children's book details the life of the world's oldest wild banded bird - WISDOM, an endangered Laysan Albatross. Of the 22 species of albatrosses, 19 are endangered. WISDOM's survival of the 2011 tsunami and other natural and man-made disasters are chronicled, including the deadly practice of longline fishing and the death of thousands of albatross chicks each year due to plastic pollution in our oceans. The book won first place in the Writer's Digest Annual Self-Published Awards in the children's book category and received a starred review by Publishers Weekly. It was named a Finalist in the Children’s/Juvenile Non-Fiction category of the 2013 Next Generation Indie Book Awards and is available in the Smithsonian Museum stores. It was nominated for the Sakura Medal for 2015, this book award is voted on by children from international schools in Japan. It even made its way to the halls of the U.S. Congress in support of a Bill to protect sea birds from longline fishing at the request of the Audubon Society.

Harvill has been commissioned by the Brazilian Ministry of the Environment - ICMBio, to create the cover paintings for their National Action Plans for the Conservation of Endangered Species. She has completed 12 covers to date, one of which is the Spix's Macaw, considered Extinct in the Wild, with only approximately 85 birds existing in captivity. Harvill's cover painting is for the international version of the National Action Plan for the Conservation of Endangered Species, which includes a re-introduction program for this macaw.

She is also active in the project "Ararinha na Natureza" of SAVE Brasil (the Brazilian affiliate of Bird Life International) that is working for the re-introduction of the Spix's Macaw or Ararinha Azul. She was invited to lead workshops in São Paulo at the Avistar Bird Conference in May of 2013 and again in October 2013 in Curacá, Bahia, the former home of the Spix's Macaw. She was a guest speaker at the opening ceremonies and led 2 days of workshops for approximately 300 children from the area.

In May of 2013, she donated a giclée print of her Maned Wolf painting, "Lonely Lobo", to be raffled by World Land Trust-US (now Rainforest Trust). The proceeds from the sale of the print went to buy 28 acres for Maned Wolf habitat in Bolivia.

In 2014, she created and donated artwork of 10 bird species in initiatives of SAVE Brasil/Bird Life Intern'l. to reduce trafficking of wild birds through their ClickAves and Plano de Voo (Flight Plan) programs.

Also in 2014, she teamed up with Rainforest Trust again to support their initiative to help the Serra Bonita Reserve in Bahia by photographing and creating a portrait of a Northern Brown Howler Monkey couple, a critically endangered species. https://www.rainforesttrust.org/news/2014/serra-bonita-q-wildlife-artist...

In March of 2014, her children's picture book, "ABAYOMI, the Brazilian Puma" written by Darcy Pattison was released. The team of Pattison and Harvill that created "WISDOM, the Midway Albatross" now brings you the story of an orphaned puma cub, struggling for survival in a fragmented forest world and the scientists that are helping him to be able to return to the wild. In 2015, the Brazilian version of the book "ABAYOMI, um Encontro Feliz", a project of the Brazilian Ministry of Culture and sponsored by FMC Corporation was released with the goal of distributing all 3,000 copies free of charge in the 17 municipalities where the pumas live. These municipalities ran an " ABAYOMI in the Schools" program.

Harvill created the Facebook group 52 WEEKS - Nature Painting Challenge in 2014 which ran for two years and was transitioned in 2016 to ABUN - Artists & Biologists Unite for Nature. As founders of ABUN, Harvill and her husband, Christoph Hrdina, now have more than 1,000 group members, with participating artists creating artwork in collaboration with biologists and organizations worldwide working for the conservation of endangered species and endangered ecosystems. The Artwork images are donated to support educational and marketing efforts. Posters and Music Videos are created for each Project. As of June 2022, ABUN is on its 40th Projects with Artist members on all continents and Projects completed on all continents as well - visit https://abun4nature.org/.

Harvill and her husband, naturalist Christoph Hrdina are partners with several prominent biologists in the private reserve - Reserva Bicudinho-do-brejo in the state of Paraná in southern Brazil. To date, 269 bird species, 11 of which are endangered have been listed on this reserve which is 30 hectares in size or approximately 90 acres. Harvill created illustrations for a children's book of the endangered Bicudinho-do-Brejo, a resident of the reserve. The 48-page picture book received the authorization of the Brazilian Ministry of Culture and was published in 2018.

In 2020, Harvill's paintings of the Atlantic Forest flora and fauna were used in a comprehensive book detailing the 3 reserves of SPVS, with 12 images serving as cover and chapter opener pages.

She was named a "Madrinha" (godmother) for Mater Natura's campaign: "Parceiros da Biodiversidade", joining a small number of invited artists to celebrate and raise awareness of nature through their arts. Visit www.maternatura.org.br (Environmental Studies Institute).

Painting a Future for Wildlife: An Interview with Artist Kitty Harvill - RAINFOREST TRUST

May 6, 2014 Based in Paraná, Brazil, Kitty Harvill is an award-winning wildlife artist and illustrator. Last year, Harvill supported Rainforest Trust’s efforts to expand Bolivia’s Barba Azul (Blue-throated Macaw) Reserve by auctioning a Maned Wolf portrait. She is currently working on a project to...
Read more... 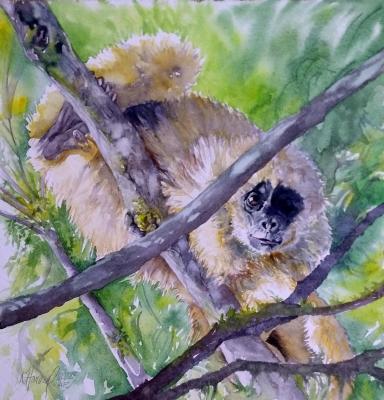