"We live on an old farm with lots of wildlife habitat which functions as a wildlife sanctuary. In addition, I support several conservation groups, but my favorite is the Nature Conservancy since they preserve the habitat of the animals and plants that need to be protected.  "

Jeanne Filler Scott paints wildlife, equine and other animal and nature subjects with attention to anatomy, character and personality. The animals in her paintings, many of whom are friends or personal acquaintances, project individuality and a living presence.  She usually paints animals in their natural surroundings, employing the same sense of familiarity she uses for her primary subjects.  Her great love for animals and nature is evident in her art.

Jeanne, her husband, and son live on a large, old farm in Washington County, Kentucky. The land is surrounded on three sides by the Beech Fork River and consists of wilderness, fields, wooded and scrub areas, ponds, and wet weather streams.  There are bottomlands, steep wooded slopes, and ridges.  Most fields are left un-mowed, with large patches of milkweed for the monarch butterflies, milkweed bugs, soldier beetles, hummingbird moths and myriads of other creatures who make the disused fields their home. The land is a sanctuary for mammals from white-tailed deer to bats; birds from bald eagles to hummingbirds; reptiles/amphibians from box turtles to gray tree frogs. There are many native wild plants with different biomes represented.

She continued, “Many orphaned, displaced or injured creatures make their way to our place. We have taken numerous fawns, turtles, hawks, and other wild animals to rehabbers. Last year, we kept a young raccoon through the winter and released him in the spring, and we have also temporarily housed other raccoons, opossums, and turtles until the weather was conducive to releasing them. In addition, we have rescued a large number of dogs and cats, horses, donkeys, and a few pigeons, and we donate monthly to the local animal shelter. We feed the wild birds all year round, and have many different species coming to our feeders, as well as squirrels, chipmunks, flying squirrels, and occasional opossums and raccoons."

When there is a problem with wildlife at properties managed by their company, the Scott’s humanely trap the animals and relocate them to their land. Animals they have relocated include raccoons, opossums, skunks, snakes, turtles, mice and squirrels.  Animals intertwine with Jeanne’s life at all levels, and they are the subjects she most frequently paints and draws. 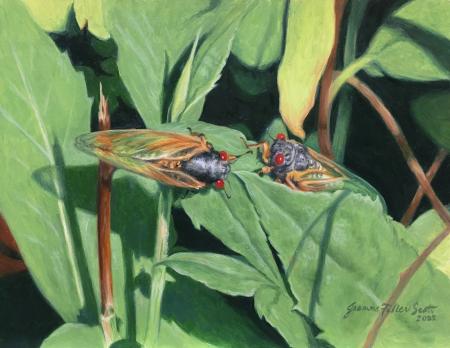