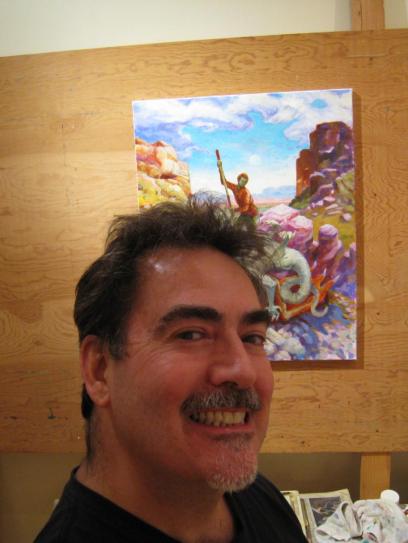 As an artist who has been painting for over 40 years, much of my inspiration has been derived from annual excursions to natural, remote areas such as Big Bend National Park, the Sierra Gigantes of Baja, Mexico, and the rainforests of Central America. I began bringing my paints in my backpack and combining hiking and painting on location, often under harsh conditions. These paintings have been shown in the former Chisos Gallery in Marathon, near Big Bend, and at the Art Car Museum in Houston, and in currated shows. My painting of the Rio Grande River was reproduced for the Texas Green Show brochure at the Art Car Museum. Also, the plein air studies have provided background information for my larger mythological paintings which have been shown in various galleries and art spaces, including five museums in Texas.

I am a member of the Big Bend Conservancy and have reported rare sightings of wildlife to the rangers in the BBNP. My wife and I have hiked in the Nosara biological reserve, and several other private reserves in Mexico and reforestation projects in Central America. We were also invited to tour a reforestation project in Panama which is connected to the Smithsonian Institute. Our experiences have taught us to appreciate the beauty of nature and the importance of conservation.

I am very interested in combining my love of both art and nature. To me, it means that I have come full circle in my art career, and have reached a higher purpose.

The Muses: Art About the Arts, San Angelo Museum of Art, 2014