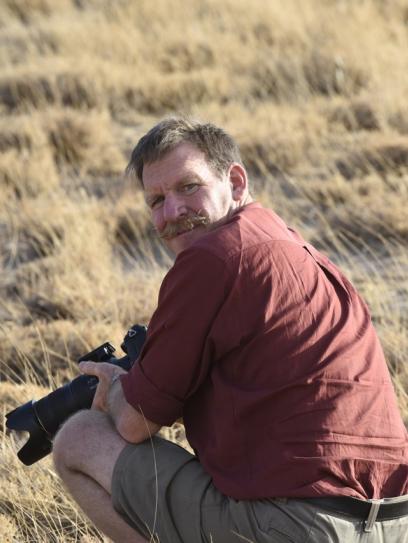 Kenyan born, Peter Blackwell has been intrigued by Africa's environments and its exceptional diversity all his life. Raised on a remote farm in Northern Kenya, the African bush was Peter's outdoor arena for entertainment and learning.

Formally educated in England, where he received a degree in Graphic Design, Peter was keen to return to his roots to pursue a career not related to the advertising world, but to focus on the bush and continue on a longtime interest, that of wildlife painting.

Virtually self taught in the area of fine art, Peter built up a reputation as a watercolour bird specialist, gaining acclaim for his ability to bring to life his feathered subjects, with incredible character interpretations, distinctive detail to bold and iridescent colours and the fine intricate work of precise feathering.

Gradually Peter included animals and landscapes as well as oils into his portfolio, all with the same great care and individuality as his bird pieces. Today he centres his attention on all the aspects of the African landscape. His originals range from pieces only a few inches in dimensions to several feet, in mixed mediums.

Peter spends many weeks of the year in the bush, where he not only obtains the reference material necessary to create his works, but also to study his subjects. His painting style, though realistic, also suggests an unconventional flavour as he constantly strives to create original works that are anatomically accurate, yet at the same time are fresh and innovative.

Shadows and golden light too, so much a part of the African make-up is of particular interest to him, and play key roles in his work. Also a professional photographer, Peter finds his photographs help not only in referencing the colours and subjects, but a photographer's eye helps in the overall aesthetics of a painting's layout and appeal.

Peter has been painting professionally for thirty years. He has completed countless commissions and held over twenty successful one man shows since 1987 in Nairobi and London. His work has been reproduced in two limited edition print sets, canvas prints and stationery and has been used by several conservation groups for fund-raising events. His paintings held in private and corporate collections can be found in America, Australia, Europe, Hong Kong, Kenya, Nepal, South Africa, Tanzania, Uganda The United Arab Emirates and Zambia.

Each of Peter's works is an attempt to capture even a brief moment of Africa's beauty, and it is his wish that each piece may offer unique insights into the Africa he knows so well.

- "A Brave New World", original acrylic incuded in the 2017 Artists for Conservation exhiibition

We have been supporting the efforts of the Big Life Foundation for several years now. They have an enormous undertaking, with over 2 million acres of African wilderness under their watchful eyes. Their anti-poaching efforts along with community based projects, and predator compensation funding is second to none. Through the sale of artwork at various auctions, we annually send "our portion" to Big Life. Knowing the funds raised are being utilised for the intended purpose, we strongly recommend Big Life Foundation in their efforts to save the African wildlife and help the local communities live harmoniously with the natural world that surrounds them. 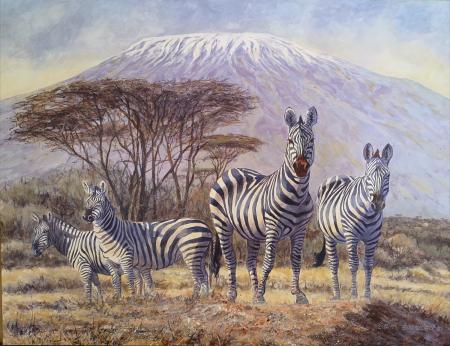