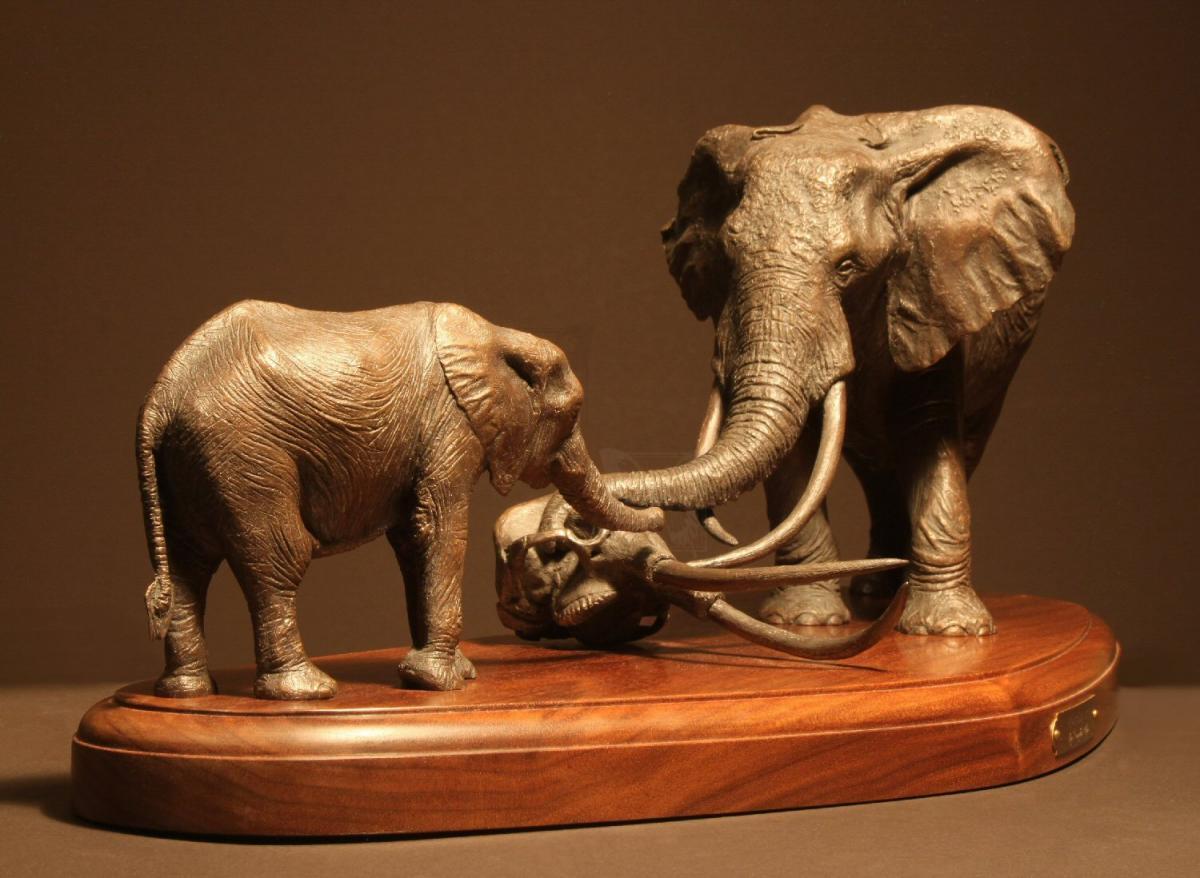 Unlike other animals, elephants seem to recognize the dead of one of their own. Although they pay no attention to the remains of other species, elephants always react to the body or bones of a dead elephant. When they come upon an elephant carcass they stop and become quiet and tense. They first reach their trunks out toward the body and smell it, then approach slowly and cautiously and begin to touch the bones. The head and tusks are of particular interest to them. They run their trunks along the tusks and jaw and feel in all the crevices and hollows in the skull. One can only speculate as to what they are thinking at this time.
These elephants are part of Cynthia Moss' study group in Amboseli National Park. The skull belongs to Erin, who died as the result of being speared. Erin's mother Echo has her trunk wrapped around the skull while her young calf Email approaches from the side.
Upon close examination of the two sculptures of Echo(Echo & Calf) you will notice that her tusks have shifted position. For most of her adult life her left tusk crossed over her right one. Sometime between 2001 and 2003 she bent the left one down, most likely by using it to lift something like a tree root. Eventually the left tusk would cross under the right.
Echo died May 3rd, 2009 in the center of Amboseli National Park. It is believed she died from a combination of old age (estimated to be 64 years) and the long three-year drought Amboseli had been experiencing.
I want to thank Joyce Poole for her critiques and advice during the sculpting process and Cynthia Moss for providing the title.

Shipping: $75 for continental US and Canada. Email me for shipping charges to other countries.
I have only a small number of bronzes available for immediate shipment. Delivery may take between three and six months.

Earlier this year AFC member Douglas Aja partnered with Amboseli Trust for Elephants (ATE) in a fundraising effort. Fifty percent of the selling price of all bronze elephant sculptures sold going to ATE. The trust's founder and director Cynthia Moss promoted the bronze on social media Facebook and...
Read more...