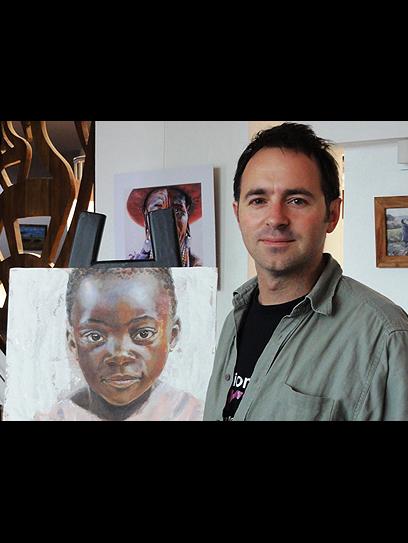 Born in Bridport, Dorset in 1971, Gregory Wellman grew up in nearby Lyme Regis. As a child he showed a talent for drawing and a great love of animals. (At five he refused to play Robin Hood in a town pageant because he carried a bow, which meant he killed deer!) He roamed the undercliffs, seashores, nearby countryside,and rivers, until his family emigrated to Australia in 1981.
He later returned to England by choice and went on to gain an 'O' Level and 'A' Level in art, and was well known amongst his friends for his many caricatures and cartoons. It was at this time that a local workshop commissioned him to design a ceremonial chair, of which two would be made, and on which Her Majesty the Queen and the Arch Bishop of Canterbury would sit.
He did a year at Drama School in Exeter before moving to Tiverton, Devon where his girlfriend promptly booked him a solo exhibition of his paintings at the local museum. At that moment in time no paintings actually existed! And he spent the next three months producing over forty pieces. The exhibition was a success, and two more followed. The improvement between each show was remarkable and gave Gregory the confidence to continue painting. Gallery sales and commissions have continued ever since, portraits of dogs and cats being particularly popular, and taking Gregory to Chicago and the Hollywood Hills on a number of occasions. His work is owned by collectors in the UK, USA, Australia, The Netherlands and Germany.
In 1996 Gregory attended an evening at the local college where African Wildlife Artist Simon Combes was giving a talk about his work. Although it would be some years before Gregory began to focus on wildlife, he remembered much of the straightforward advice and encouragement that Simon Combes gave him.
It was a chance meeting with an old aquaintance in 2003 that changed the course of his artistic aspirations. Steve Burgess (AFC, SAA) had moved back to the area, and his wildlife work had improved dramatically in four years. So impressed and inspired by Steve's work, Gregory began to focus mainly on wildlife and portraiture, with commissions continuing at a steady rate. A finalist in the Daily Mail's Not The Turner Prize in 2004, Gregory is painting more than ever and a trip to Africa in September 2005 with Steve Burgess inspired some of his best wildlife work. His large pastel works of the Maasai people are particularly popular, and Gregory is currently looking for gallery representation to promote these.

In 2005 Gregory was commissioned by actor/director Kenneth Branagh to produce portraits of the cast and crew of his forthcoming film of Shakespeare's As You Like It.

Works are shown annually at The South West Academy of Fine and Applied Art. Commissions are an ongoing part of Gregory's life as a painter.

In 2011 Gregory travelled to Tanzania three times. After climbing Kilimanjaro, Gregory secured the first Artist Residency at Arusha's Cultural Heritage Centre. Here he demonstrated his painting to visitors and schools and held a solo exhibition. He returned later in the year to hold a second successful solo show, selling originals, prints and gaining a number of commissions. Whilst here he laid the groundwork for a successful Art Safari in 2013 to Northern Tanzania. Ten nights in comfortable accommodation in National Parks and private concessions, sketching and painting at Arusha National Park, Tarangire and the Ngorongoro Crater.
Gregory runs workshops in Portraiture and Wildlife painting and demonstrates for art societies, and has seen a large increase in his private tuition.
His painting 'Winter Evening, Dartmoor' was short listed and featured in International Artist magazine's Landscape Contest (#84), followed in issue #85 by an eight page article on his Maasai and wildlife painting.
Winner of Best in Show 2013 at The Association of Animal Artists for his painting of Lesser Flamingoes, 'Pink & Black'.
He is a Professional Associate and tutor of the Society for All Artists (the UKs largest art society) and a member of TWASI, The Wildlife Art Society International. He appeared on Sky Arts Portrait Artist of the Year in November 2013, and took part in Sky Arts Landscape Artist of the Year 2015.
In 2017, 2018 & 2019 Gregory was a tutor in South West France with Palettes de Gascogne Palettes De Gascogne Painting Holidays France

His painting of an orangutan 'These Quiet Evenings In' was selected for exhibition at the AFC event at The Van Dusen Botanical Gardens, Vancouver. Gregory also painted live at the event, and hs painting was sellected for the 2018 AFC Calendar.

2018- Donated artwork to Sketch For Survival auction in London.

Gregory returned to the 2018 & 2019 AFC Festival and Annual Exhibition to demonstrate his wildlife painting there, to promote the event, add artworks to the Silent Skies mural and to take part in the exciting live Raptor Sketch Auctions, raising money for AFC.

In 2022- dependent on bookings- Gregory will be an artist host on the 3rd AFC fundraising safari in Kenya run by Jackson's African Safaris- for more information:

Gregory has fundraised and donated money to AFC, to The Rhino Trust, Tiger charities and the causes funded by Explorers Against Extinction's Sketch For Survival events in London, England.

"Striving For That Extra Something"- International Artist Magazine